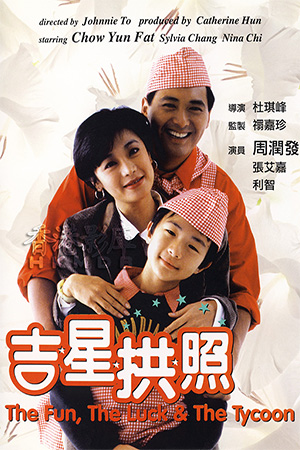 In what is essentially a reworking of Eddie Murphy’s popular comedy ‘Coming To America’, Chow Yun-Fat takes the role of a wealthy socialite who becomes increasingly bored of the life he leads. Surrounded by sycophantic associates and with every decision in his life already made for him, he decides to go out into the working world and lead a more normal life. Soon after leaving his cloistered world he manages to find work at a local restaurant and happily takes on the most mundane tasks. Happy with his relatively stress free environment, Chow meets and slowly falls in love with the daughter of the restaurant owner and manages to use his subtle charms on her. Her father, however, has other ideas and continues to try to marry her off to a rich suitor, even though she is firmly against the idea. Chow also faces the prospect of marriage to a far from ideal partner and realises his former world is beginning to close in on his new environment. The time thus comes to reveal his true identity to his new workmates and try to win the heart of the the woman he loves.

Chinese New Year comedies tend to follow a very well defined pattern i.e. star-studded, glossy and little substance. Although ‘The Fun, The Luck And The Tycoon’ is certainly full of stars (including pop group ‘Beyond’) it thankfully offers more entertainment than many other films that have succeeded during the holiday periods. Following the plotline that was tried and tested even before ‘Coming To America’, director Johnnie To manages to create a fun comedy that is more cohesive than perhaps could have been expected. Chow Yun-Fat gives a performance more akin to ‘Diary Of A Big Man’ than the hopelessly over-the-top ‘Eighth Happiness’ or ‘The Greatest Lover’ and this is again a definite plus point. Chow is joined by the always professional Sylvia Chang who handles the romantic role very well, while the farcical antics are left up to Nina Li Chi and Lawrence Cheng. ‘The Fun, The Luck And The Tycoon’ is not hilarious or particularly side-splitting, but the humour is such that it hits the mark in a subtle manner. Therefore this is an agreeable Chow Yun-Fat comedy that is mostly successful in its modest ambitions.