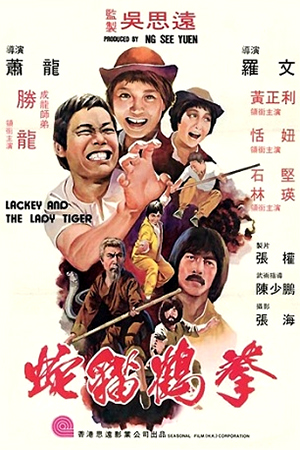 Hong Kong cinema is full of faces that fill the background of the greatest films of the industry. Veteran character actors, stuntmen and choreographers constantly appear in the supporting cast of such features with very little credit. Stuntman Mars is one of these familiar faces that has graced many of Jackie Chan’s films since the early 80s. However, Mars’ appearance as one of the leads in ‘Dragon Lord’ was always a reminder to viewers that he did have a pleasant screen image that was, sadly, barely capitalised upon. Two years before this was his leading role in ‘Lackey And The Lady Tiger’ – another kung fu comedy from Seasonal films who were still eager to find another Jackie Chan.

Mars stars as the kind of character that is practically identical to that of Chien Fu in ‘Snake In The Eagle’s Shadow’; a young orphan who is mercilessly bullied by the classmates of the kung fu school that he works in. As with Chien Fu, he also wants nothing more than to learn kung fu and frequently spies upon the lessons in the hope of picking up a few moves. Although this plan fails and he is instead subjected to yet more ridicule, he befriends a callow young man (who’s actually a woman quite obviously disguised) who teaches him a few useful techniques. His knowledge is added to when he meets the master of his new friend and discovers the art of the ‘Fisherman’s Pole’. This is combined with a style that he creates himself while observing the way his cat falls when thrown in the air (cue some bizarre, yet amusing cat footage). Meanwhile a former prisoner and known troublemaker arrives in town looking to settle some scores with those who imprisoned him. His main target proves to be the old master and it is not long before the innocent orphan is drawn into the battle.

Although far from multi-layered, ‘Snake In The Eagle’s Shadow’ had a storyline that was developed beyond its simple premise. Understanding the time it was released, it is also possible to see how much of a breath of fresh air it was in an increasingly stale genre. However, the deluge of kung fu comedies that drew inspiration from it were mostly devoid of such originality and tended to be poor imitations, lacking the vital plot consistency. ‘Lackey And The Lady Tiger’ is another of these films and falls foul of the same pitfalls that the numerous others did. With a cobbled together storyline and a series of clichés that were tired a mere two years after their conception, this kung fu comedy never amounts to anything more than simple enjoyment. Too much time is devoted to the episodic adventures of the hero while the eventual narrative conflict is uncomfortably inserted near the end. On a positive note, Mars does make a sympathetic hero and, despite a lack of martial arts skills, seems at home in the action sequences. Hwang Jang Lee makes a late, yet welcome appearance as the antagonist, but so great is his mastery that the end fight is hardly believable. Nonetheless, ‘Lackey And The Lady Tiger’ is inoffensive genre fodder that is evidence that Mars is much more than just a stuntman. It’s sad that this average effort will be his lasting legacy as a main star.