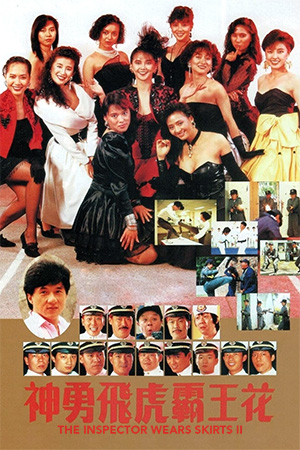 The original ‘The Inspector Wears Skirts’ was notable in many people’s minds for two reasons: firstly it was produced by Jackie Chan and drew on the talents of his famed stunt team; secondly it provided Cynthia Rothrock with a good supporting role and a few enjoyable action set-pieces. Aside from these points, it was actually a bright and breezy action-comedy that was a pleasant throwback to the heyday of the Hong Kong industry. The bumper box-office takings ensured that  a sequel quickly jumped from the drawing board to the big screen, sans Cynthia Rothrock.

The Banshee Team – a band of well-trained, yet wildly varying female commandos – are again given the opportunity to compete with their arrogant male colleagues in a number of tasks designed to train them for future missions. This time they also have a quartet of rookies joining their Banshee team and, remembering the difficulties they initially faced when starting the training, decide to play some tricks on the newcomers. However, these new recruits give as good as they get and the Banshee team is torn apart by their in-house fighting and comic antics. Meanwhile their stern commander (Hu) continues to act as the object of affection for the head of the all-male ‘Flying Tiger Commandos’ (Fong), though this time he has competition from a visiting anti-terrorist captain (Wong). Although the various disputes rage on, the training gradually comes to the fore and all of the female recruits begin to outshine the ‘Flying Tigers’ in the exercises that are meant to develop their skills. The petty issues of superiority are rapidly ignored when a real mission arrives and the hitherto rivals must now team up to defeat a band of criminals.

An ensemble cast of faces that epitomise 80s Hong Kong cinema; from lecherous Billy Lau to the delicate presence of Regina Kent, every performer will be familiar to viewers who’ve grown accustomed to these conventions. Another major reminder of its roots is the unenviable lack of cohesion or story. The 80s gave viewers many genuine classics, but there were also those that tended to view such distractions as storylines as something that should be tacked onto the end. ‘The Inspector Wears Skirts II’ happily ambles along with the main comedic structure of the film only to suddenly introduce a woefully underdeveloped story during the last twenty minutes. The device serves merely to give the action of the stars some context and doesn’t attempt to make any sense. The set-pieces and stunts during this period are typically well-performed, but still fail to cover what is a very infuriating aspect of the film.

This is not a film that tries to please the purists though. Those who have difficulty sitting through long sequences of Hong Kong slapstick would be best advised to avoid this film as the main concentration of Wellson Chin is comedy and the usual antics of his stars.  For the most part this proves to be a good enough distraction to enjoy the duration of the movie. With a slice of nostalgic fight action and a genuine feel-good factor, ‘The Inspector Wears Skirts II’ is a sequel that, while not quite offering the entertainment of the original, isn’t too bad a production to sit through for 90 minutes.