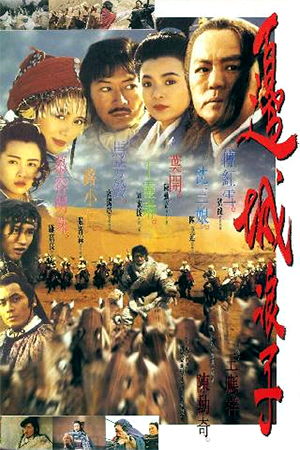 ?! This would seem the perfect way to start a review for a 90 minute feature that is apparently both of the ‘A Warrior’s Tragedy’ films edited together. With such a sketchy history one would expect a convoluted and often baffling film – not surprisingly, ‘The Invincible Power Of Kindness’ fits this description all too accurately.

To put the narrative in simple terms is not easy, but for the sake of the review what follows is a brave attempt. Frankie Chan takes the role of a warrior in search of revenge for his father’s killer. After lengthy training, the avenger sets out into the Chinese wilderness to find out more about the killers involved. On reaching a distant outpost he encounters a band of cut-throat characters who want to hire his services for their own purposes; among these is a crippled inn-keeper who hopes to enlist the stranger into his diabolical plans. Following this a chance meeting with a fellow avenger who is looking to exorcise his own inner-demons and fight back against those who killed members of his family. The paths of both are soon entwined as the various plots and motives unravel.

There have been Hong Kong productions that have been baffling, but retain a certain charm that makes them compulsive viewing. Unfortunately ‘The Invincible Power Of Kindness’ is not one of them. Director Frankie Chan does, to his credit, use some intriguing environments and fully capitalises on the grandeur of the wild landscape. However he pays little intention to any logical development of plot or characters; the viewer is instead bombarded with bizarre characters and sudden twists that are hard to swallow. With this formula running throughout the film, it doesn’t take long for viewing attention to drop away completely. The action is one of the definite bright spots and it is for this reason alone that some may want to watch it. If only this strength was echoed into other areas there may be more to recommend it.

It’s probable that ‘A Warrior’s Tragedy 1+2’ were more enjoyable when viewed separately. In this format though there is very little to support this assumption. A two and half star rating, but there are odd moments which earn an extra star.