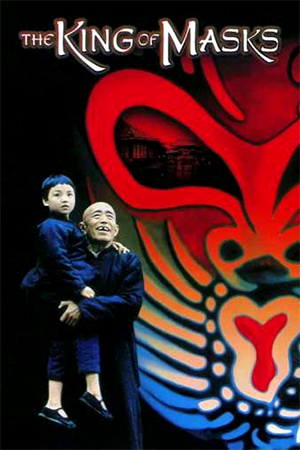 The ‘King Of Masks’, Wang, is the last surviving master of the dying art of ‘mask change’ and he travels throughout China dazzling all with his exceptional skill. Knowing that, in order for this family secret to continue, he must pass it on, Wang searches for a protégé. His family’s tradition strictly states that it can only be taught to males, therefore the traveller looks for a suitable boy to adopt. After rejecting various offers by poverty-stricken parents to sell their daughters, Wang finally finds a boy who he thinks will be able to learn the valuable craft. Unfortunately, it takes the old man a while to discover that his new student is in fact a young girl and therefore ineligible for his training. Such a discovery initially effects the bond that had formed between the two, but gradually Wang puts aside feelings of being cheated and takes the girl under his wing. Together the two perform their individual street acts and become more like a grandfather and granddaughter than a master/student. A tragic accident yet again compromises this deep friendship though and the ‘King Of Masks’ finds his living destroyed in the process. Nevertheless, neither party can forget the close link they had and how they truly rely on each other.

The master/student story has been used by many different Hong Kong genres and remains a device that, when used well, can be an asset for the film. ‘The King Of Masks’ takes the concept and creates a genuine masterpiece, full to the brim of a warmth and compassion that is rarely revealed in cinema. The narrative uses the aforementioned starting point and expands it beyond the usual restrictions; instead the viewer is treated to a poetic musing on the very nature of friendship. From the opening shots of gentle Chinese village life and the introduction of Wang, there is no doubt that something very special is about to unfold. By the time the end credits roll, this feeling is thoroughly proven and the viewer is struggling to find fault with such excellence. Chu Yuk as the eponymous ‘King Of Masks’ is superb, combining a genuine screen presence with a humble, understated performance that few would be able to achieve. Due credit must also go to co-star Chao Yim Yin as the young girl who joins Wang on his journey; her immaculate handling of the material adds significant resonance to an already masterful production. The only possible quibble is so minor that it only deserves a brief mention; some may consider the metaphor of the masks as somewhat heavy-handed and certain moments to be too sentimental, but these are very picky criticisms. The fact of the matter is that ‘The King Of Masks’ represents what is sadly lacking in so many films that pretend to have a social conscience i.e. this actually has a heart beneath its surface instead of Hollywood’s frequent emotional sign-posting. A film that comes very highly recommended, especially to those who enjoy watching cinema that stirs the heart.