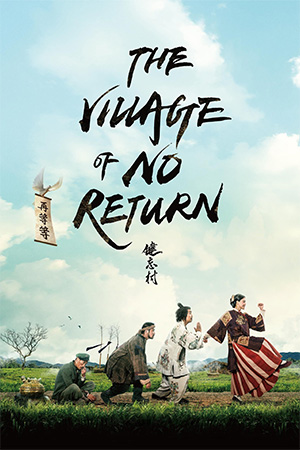 Desire village is a remote habitation cut off from the rest of China by mountains and forests. Despite this, a Taoist priest happens upon the place and introduces himself to the villagers who initially treat him with suspicion. When the priest reveals his special invention – a box that takes away memories – the interest bubbles up and all of the villagers discover that ignorance really is bliss. However, a bandit clan is ready to attack and the happy state of confusion is soon to be unceremoniously upset.

‘The Village Of No Return’ is a slick, attractive looking production, full of colour and spectacle. While pretty pictures are being painted on the screen, all is well. The problem comes when one tries to feel a little more involved in proceedings because ‘The Village Of No Return’ is so intent on the surface that it forgets to have anything of value to offer. There are sporadic laughs and general eccentricity, but nothing that makes this more than a mildly diverting, episodic comedy.

As ‘The Village Of No Return’ is a local comedy there could be an argument that it is intended for Chinese audiences. There may be some truth in that. Nevertheless, the general flow of the film means that whatever humour is there for general consumption is suffocated by the self-conscious ‘quirkiness’ before it can escape. As a reviewer who loves the surreal or absurd, I had hopes when I had read others call this a ‘weird’ film. Yet ‘The Village Of No Return’ is stuck between two stools – too disjointed to appeal to the mainstream, but too flat to be considered anything particularly out of the ordinary. It’s not that the film doesn’t have its moments – it ticks along quite pleasantly and offers a few smiles along the way. These moments, though, are not enough to make the two hours memorable and ‘The Village Of No Return’ fades away soon after the credits roll.