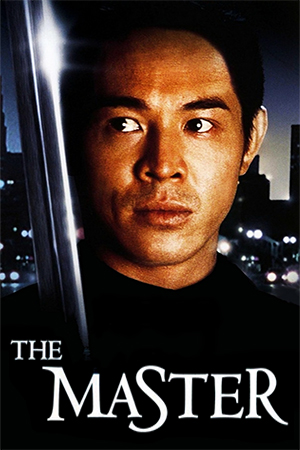 Tak (Yuen Wah) was once a highly accomplished teacher of the Martial Arts but now he lives the quiet life as a Chinese medicinal practitioner, working from his shop in downtown Los Angeles.  When the teacher of the local Karate school (Trimble) decides to challenge Tak to a fight, he is caught off guard by sheer numbers and badly injured.  A young girl comes to his aid but the language barrier provides unforeseen complications so while he heals Tak’s shop goes into disrepute.  When Tak’s student Jet (Li) arrives in L.A. to visit his master, he is confronted by a deserted shop with no sign of of Tak.  All alone in a big city with no grasp of English, it’s up to Jet to track down his master and take revenge on the man who ruined his business.

After achieving notoriety with the ‘Shaolin Temple’ movies, Jet Li attempted to make the leap into modern day actioners with this Tsui Hark-directed outing. Clearly marketed towards an international audience, ‘The Master’ has very little of that Hong Kong flavour and is structured more like a Hollywood movie. Unfortunately though, it’s not a very successful one as the film sports a fairly tired “new kid in town” plot as well as a very weak supporting cast. Thankfully though, the film does still contain a couple of action highlights, particularly the impressive finale which sees Li unleashing some Wu Shu brilliance atop a skyscraper.

Like many before and after it, ‘The Master’ attempts to bridge the gap between East and West by copying a tried and tested formula.  Sadly though, with a predictable script and some seriously under-par actors, it was never really going to amount to much more than a set of average fight sequences.