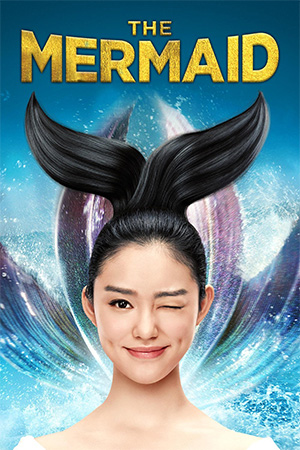 Stephen Chow returns and once again it is in the position of director rather than lead star. He does, however, continue to bring new talent through with his films and ‘The Mermaid’ offers the chance for the adorable (and wonderfully named) Jelly Lin to follow in the footsteps of Cecilia Cheung and Vicki Zhao.

Crass and entirely selfish businessman Liu Xuan has made billions from land reclamation and real estate. His latest venture focuses on Green Gulf and to make sure he secures the area without any interruption from the wildlife, he uses a high range sonar device to drive all aquatic life away. What he doesn’t know is that Green Gulf is the home to the last enclave of merpeople who have already seen their numbers dwindle thanks to his past avarice. In a desperate attempt to stop the destruction of the merpeople send pretty but naive Shan (Lin) to seduce and kill him therefore ending the development. Unfortunately Shan is a clumsy assassin and instead of eliminating Liu she ends up bewitching him through her innocent ways. Although this should be good news for the merpeople, Liu’s amoral former lover (Zhang) determines to destroy her mermaid rival and wipe out the community forever.

‘The Mermaid’s not too subtle theme is mankind’s destruction of the environment and starts with a collage of images showing the very worst of the problem. Yet, while this is admirable and not many viewers will question the digs at mankind that Chow takes, the film avoids drifting off into a preachy polemic. It shows that a serious message can be made without stopping the film from being a fresh, often funny piece of cinema. Once again the writer and director is able to mix in a measure of pathos into his absurdist humour which is no mean feat.

The stand-out of ‘The Mermaid’ is Jelly Lin. She has a beguiling innocence that helps the film pass through the moments where the pace begins to slacken; by the end of the first hour it feels as if the best jokes have been used and the storyline has lost its way. She is a distraction from the errors in the film such as the fact that Liu goes from egomaniac to hero a little too suddenly; his redemption isn’t given the impetus to make it believable and this makes the plot device difficult to fully accept. Thankfully, while Jelly Lin is beaming these considerations are not too much of a concern.

While ‘The Mermaid’ isn’t vintage Stephen Chow – it’s not in the same league as ‘Kung Fu Hustle’, ‘Shaolin Soccer’ or earlier work like ‘God of Cookery’ and ‘King of Comedy’ – it does have some very amusing moments, most involving Shan’s multi-tentacled protector’s attempts to hide his identity. ‘The Mermaid’ has the feel-good factor and is probably as good a rom-com as you’re likely to see this year. Yet that somehow doesn’t seem enough from a film-maker like Chow.