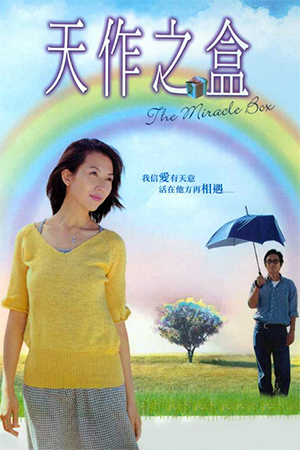 Though based on the life of self-sacrificing doctor Joanna Tse and her work during Hong Kong’s tragic SARS crisis, the main focus is on Tse’s loving relationship with her husband Albert. Those familiar with the real-life story may already know the outcome of this touching biopic and will perhaps be more able to comment on the film’s authenticity. Nevertheless, from the perspective of someone unfamiliar with the real lives of the two doctors, it is the cinematic quality that I find myself commenting on.

After passing her medical exams, young student Joanna Tse enters the profession while also keeping in contact with her former tutor Albert Lai. Though Lai is seen as a laconic figure, he nurtures a heart-felt love for Joanna – a feeling that she happily returns. Their courtship advances and he two eventually marry, blissfully happy with the direction their lives have taken. Tragically, Albert’s previous battle with leukaemia is again resumed as the doctor finds himself facing up to the return of this devastating illness. Returning from her prestigious post in an Australian medical institute, Joanna resolves to nurse her husband back to health and do everything she can to devote her life to helping others.

In trying to summarise the synopsis, it’s difficult not to reveal what happens to both characters. Obviously, those familiar with the people who inspired the film will already know the ending, but for everyone else it’s important to give away as little as possible. Suffice to say, this is a sentimental, yet occasionally very powerful drama that offers insights into love and sacrifice. While many may be uncomfortable with, what could be seen as, a saccharine-coated drama, there’s an undeniable resonance in the storyline. Though ‘The Miracle Box’ doesn’t tackle terminal illness as successfully as ‘Funeral March’ or ‘C’est La Vie Mon Cherie’, any realistic tackling of leukaemia is bound to have an emotional punch, while the deep scare that SARS left in the Asian consciousness is still very much in evidence. The fact that this is inspired by real people does mean that comparisons to the aforementioned films is pointless, of course.

The relative box-office success of ‘The Miracle Box’ is perhaps due to the fact that, at its core, this is an optimistic production. Though the strong religious faith of the central characters is put under immense pressure, this is a story where any tragedies are courageously faced. The illnesses that are faced are also not allowed to take over from what is essentially a traditional love story between two people who clearly adore each other. It is therefore more than just an extended medical drama or melodramatic biopic; though there are theatrical moments, the film mostly deals with genuine emotion and a welcome dose of subtlety.

Some may still be discouraged by the lack of tension or real impetus, as there is little build up to the narrative’s most powerful scenes. It’s true that the final twenty minutes deal with a great deal in a rather hasty manner; without giving too much away, the closing third of the film rushes some pivotal moments, therefore endangering the overall impact. Director Adrian Kwan lets the pace unravel at this point and the measured pacing of the opening hour seems to be contradicted by its ending. I’m not aware of Kwan’s other work or background, but such a lack of control is more than sign of an inexperienced director than anything else. In a similar way, the respective believes and convictions of Joanna and Albert are not fleshed-out as strongly as would’ve been advised.

While ‘The Miracle Box’ is an imperfect drama, it is without a doubt a film that benefits from a few exceptional performances. Ada Choi is superb as Joanna Tse – her efforts in this role show the massive advancements she has made as an actress in the past decade. Her relationship with Tse Kwan Ho is realistic, touching and achieves something that flounders more prominent productions: you actually believe that the two leads are in love and this chemistry makes their marriage supremely sympathetic. The growth of their love is one of the production’s definite merits and isn’t dependent on grand gestures. Meanwhile, screen veteran Cheng Pei Pei has a pleasing supporting role as Joanna Tse’s mother and John Shum (who definitely couldn’t be referred to as ‘Curly’ anymore) is a welcome addition.  ‘The Miracle Box’ may or may not be faithful to its inspiration, but its a film with a message that is refreshingly earnest.