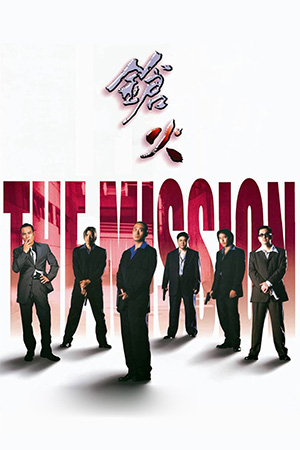 Hong Kong has seen a few films in recent years that have gone on to not only gain local success, but also garner worldwide praise. Top of this particular tree was Johnnie To’s ‘The Mission’ which has impressed film festival audiences around the world and is now allegedly being touted for a future Hollywood remake. The first major triumph of this stylish thriller is the very familiar storyline which is here turned into an exercise in the control of a visionary director.

Former kung-fu villain Eddie Ko plays triad kingpin Lung who presides over a powerful army of foot soldiers. When an assassination attempt is barely foiled by his less expert bodyguards, it’s clear that someone wants Lung out of the way. With the failed attempt taking part in such a calculated manner though, it’s soon evident that it could be an inside job. Taking this into account, Lung orders his loyal deputy to hire five independent bodyguards who will shield him through the upcoming days of strife. The mission is therefore set before the assorted quintet of Roy, Shin, Curtis, Mic and James. The various members of this team each start out with their own loyalties and friendships, but by the time the they’ve been through near-death situations, their relationships soon change. After the assigned mission is successfully completed and the enemy is rooted out, the group must face a new challenge. This will finally test how strong this new bond really is.

In a style that could best be described as ‘cinematic minimalism’, director To shows the same kind of subtlety that is well seen in the work of Takeshi Kitano. Instead of just going through the motions of character development within designated situations, this expertly used technique allows moments of sheer excellence where nothing happens. The simple use of the internal practical joke – the last thing to be expected of in a thriller – is used as the perfect platform for the protagonists to show their depth. It’s the assured confidence of a skilled film-maker to be unafraid by silence and to even use it to parade the actors’ talents. Rather than relying on a lyrical script therefore, the performers are here given moments to shine with just their facial expressions. Everything about ‘The Mission’ is well-thought out; every part of the production has a noticeable stamp of quality. The film’s musical score is one of the first things to grab the viewer as it alternates between an almost surreal organ piece and the superb track that plays during the shopping centre shoot-out. Beyond this is the first-rate performances by the leading quintet and the numerous other characters within the picture – all give career-best displays. Thespian heavyweights Francis Ng, Anthony Wong and Simon Yam stand-out among the plaudits, but it’s also impressive to see frequent bit-part player Lam Suet a chance to step out of the shadows. Johnnie To makes sure that every department is of the highest standard and there really are no major weak areas within the film.

Viewers expecting the rudimentary thriller that the narrative implies will be in for a rude awakening as ‘The Mission’ is not an average mainstream feature. Within this wonderfully crafted and thoroughly satisfying film is enough reasons to have full assurance in the future of Hong Kong cinema. With other productions of definite merit (even when not up to this standard) still coming out of the East, there is much to look forward to. Required viewing and destined to be seen as one of the most important films to come out of the early part of the decade.