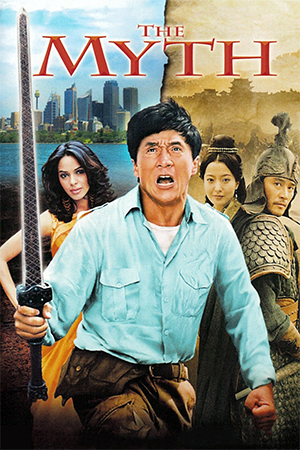 One of the highlights of 2004 was ‘New Police Story’, Jackie Chan’s attempt to ingratiate himself with the Hong Kong public after alienating them with his Hollywood misadventure. ‘The Myth’ is a further attempt to rekindle the popularity he once enjoyed in Asia and banish memories of his supposed sell-out to the ether.

Archaeologist Jack (Chan) is devoted to uncovering lost relics from around the world. His close friend and physicist William (Leung) pitches an interesting venture to Jack; to uncover the truth about a fabled act of levitation produced by an Indian mystic. William is keen to point out the archaeological value in such findings, but clearly has hidden motives for his studies and steals an ancient artefact to discover more. While Jack is implicated in the maelstrom created by William’s actions, he is also pre-occupied by increasingly vivid dreams he is having about being a general in ancient China. These intense images trouble him every night as does the discovery of a portrait of the Korean princess that haunts his sleep. As Jack pieces together his supposed past and his present, he starts to move closer to a significant discovery that promises to answer all of his questions.

If you were to fuse together ‘Armour Of God III’ and a slice of Zhang Yimou’s arthouse swordplay style, you would come close to ‘The Myth’. An uncomfortable puzzle that struggles to reconcile two such fundamentally disparate stories, ‘The Myth’ is a mixture of the not so sublime and the not too ridiculous, a production that is soaked in money but lacking in real direction. That said though, there’s some stark reminders of what we’ll all miss when Jackie does finally retire from these kind of films.

In a cinematic world dominated by computer effects (something also true of this production), it’s always life-affirming to see a little bit of Jackie magic up on the screen. The man who was once called the ‘human computer effect’ features in two brief, yet enchanting action scenes; the first sees him take on a horde of spear-wielding guards in a mausoleum, while the second is a dexterous escapade in a rat glue factory – who else could take such unusual locations and construct such free-flowing action within them? These two moments on their own are worth the price of admission – as the saying goes – and prove to be a far more pleasing aspect of the film than all of the CGI effects that feature prominently throughout. Both action sequences are obviously shoe-horned into the narrative to allow Chan to roll back the years, but any opportunity to see him turning on the style again after his years in the Hollywood wilderness is most welcome.

While the ‘The Myth’ revels in its opulent production values, solid computer effects and the aforementioned Jackie tussles, it struggles to balance both storylines and chooses to generate an uneasy hybrid from the elements. Just as the viewer is being drawn into the historical story, the focus switches to the modern day adventures of Jack and his quest to uncover the meaning of his dreams. What is so frustrating about this is that our star has long promised us a real ‘Armour Of God III’ and here tantalises us with what could be, only to then revert back to the ancient setting. Not that either of the storylines really gain superiority, but that two such promising ideas are forced together is an unfortunate side-effect of trying to please everyone.

Despite the difficult construction of the main narrative, Stanley Tong can be commended for helping maintain a solid, if unremarkable pace. There are few slow moments here – quite an achievement for a two hour action film – though at the same time the actual tension created by Jack’s quest for truth is underwhelming. The aspects of sci-fi that are momentarily brought into the main story do little to benefit the already messy mixture and the denouement is disappointing for a star whose incredible ingenuity over the years has been so precious. What does work is the exotic locations, the sumptuous design and the international flavour that is only recently appreciated by Hong Kong productions. Such a refreshing air papers over the obvious cracks and the adventure seem more absorbing than it initially appears.

‘The Myth’ gives Jackie Chan the opportunity to play two very different characters; Jack is the archetypal role that we’ve seen Chan take for years, while his ancient incarnation appears to be the direction that he would like to take in the future. The former persona is typically assured with the star’s effortless charm acting as a constant reminder of his on-screen strengths. The latter, however, proves problematic. General Meng Yi is a character who is never extended beyond the parameters of honourable soldier, his turmoil over the love he has for Ok Soo is never fleshed out or developed enough to strike the necessary emotional balance. Jackie performs the job admirably, but the fractured nature of the storyline means that the more challenging of the two roles is given little breathing space. The more stately narrative is also prone to a few too many Jackie-isms – fine for us old-time fans, but hardly conducive to making Meng Yi are ‘serious’ character. People flying on wires is one thing, but horse kung-fu is stretching things a bit.

At times frustrating and yet mostly entertaining, ‘The Myth’ may not be vintage Chan, but there are glimpses here of a performer who is still a valuable treasure for world cinema. Whether he’s interacting with his beautiful co-stars or engaging in some furious action, Jackie Chan produces a work that relies on the warm persona of its star and only struggles when it strays away from this. If only the two conflicting elements of the film could have been devoted to two separate productions, there may have been even more to cheer about. As it stands though, this continues the rejuvenation started in ‘New Police Story’ despite the obvious flaws.