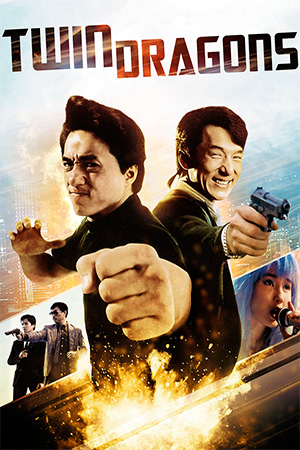 This film was originally intended to raise funds for the HK Directors Guild. However, even though the film did extremely well on its home cinema run, the cash raised apparently went elsewhere, although many cast members, including Jackie went unpaid!

In truth, this is not a great movie, with nothing new added to the age old “separated brothers” story and some bad special effects. However, it is still better than Van Damme’s ‘Double Impact’ and the two action scenes at either end of the film are worth the price of admission alone! Especially the final reel, showcasing some incredible acrobatics and choreography from Jackie and the members of various stunt teams including his own Sing Ga Ban. It is the middle hour of the movie that lets it down. The script was clearly knocked up in someone’s lunch break, and the two very different directing styles do not blend together cohesively, instead combining to create a muddled, uninteresting narrative.

This film could have been so much better. More action and better acting should have been incorporated into the middle of the film, especially after we are built up to expect something really cool after the first ten minutes.

For some reason this was given a UK theatrical release after ‘Rush Hour’ was so successful and seemed to do more harm than good to Chan’s newly acquired international reputation. Another film (pre Disney ‘Drunken Master 2’ anyone) should have been chosen to display the real Jackie. However, if you ever buy a best of compilation, it will undoubtedly feature the excellent final scenes from the car factory. As a result, buy the compilation and not this DVD!