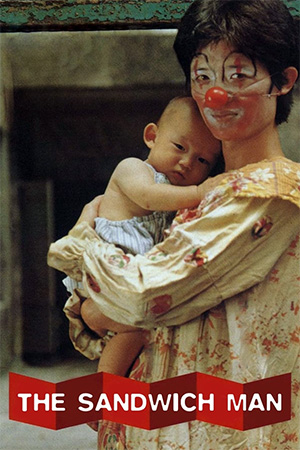 Seen as one of the founding blocks of the Taiwanese New Wave, ‘The Sandwich Man’ presents three realist stories that are all based on the works of Huang Chun-Ming. The trio are all set during the 60s, before the miraculous economic boom had fully taken hold of the territory.

Story one, based on the eponymous short story, features an impoverished couple trying to raise a baby in the city. Their only means of income is from the father’s poorly paid work as a Sandwich Man, a wandering clown who carries a placard around the town advertising films for the local cinema owner. The work barely pays and the couple find the idealism of the past under threat. Story two is ‘Vicki’s Hat’ and focuses on two salesmen who travel around the country as representatives of a Japanese pressure cooker company. One of the men is especially motivated as he has a young child on the way while the other becomes fascinated by a local girl who often visits the team’s presentations. The final story, ‘The Taste of Apples’, is a lighter tale, telling the story of a worker knocked down in the street by an American officer stationed in the city. This seemingly unfortunate incident turns out to be a pleasing in disguise though as he is now cared for at the US military hospital and his family is brought to his side to enjoy the good fortune.

It’s not always easy to separate the historical significance of a film from the actual enjoyment the viewer has watching it. ‘The Sandwich Man’ is a landmark film that brought in the social realist aesthetic into Taiwanese cinema and was an early film in the career of acclaimed director Hou Hsiao-Hsien. While its style and focus on the ordinary is laudable, each self-contained story ambles along without much purpose. This is an easier feat to achieve in short story format where the background emotions can be hinted at in the text. On celluloid this makes for a dry and moderately frustrating experience.

Realist cinema is all about the minutiae, the wonder and pain of the mundane and everyday. Many films have elevated the everyday to the glorious and the tragic, giving the most stripped down story a life every bit as fascinating as the bigger more cinematic features. Each story within ‘The Sandwich Man’ comes with certain pathos and the potential is there, yet nothing quite attaches itself to the mind as it should.

The opening story, ‘The Sandwich Man’, is perhaps the grittiest of the three and Hou Hsiao-Hsien knows just how to shoot the quiet struggle of the ordinary man. This skill would become more and more nuanced as Hou’s career continued though the rough ideas are there in this short feature. ‘Vicki’s Hat’ almost adds a surreal thread through its duration and has a few surprises before finishing on a downbeat note. The final story is potentially the most intriguing as it contrasts the native Taiwanese with the prosperous American military station in the city at the time. This too flits away and any resonance is lost in the cash grab of the injured man and his family.

Overall this is an interesting, thoughtful collection of stories that shows promise. Yet it is once again a film whose historical significance leaves more of an impression than the material therein.