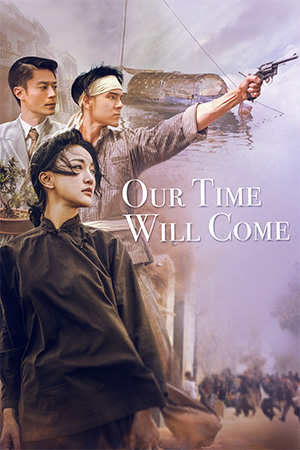 Ann Hui returns with another wartime story following the great success of ‘The Golden Era’, but this time the focus is more firmly on the resistance movement in Hong Kong during World War II.

School teacher Lan (Xun) is contemplating a quiet life with her childhood sweetheart in Hong Kong until Japan begins its occupation of the land. Her life is immediately changed with the closure of her school and a subsequent encounter with writer Mao Dun who is renting a room in her mother’s apartment, secretly holding the names of fellow resistance fighters in his possession. A reluctant Lan helps noted guerilla and resistance hero Blackie Lau smuggle the writer out of the country with the Japanese army in pursuit. Now face-to-face with the oppression that surrounds her, Lan joins the resistance and passes important messages between the key members of the movement. Matters become complicated when Lan’s mother, fearing for her daughter and also feeling an indignation about what is happening, begins to involve herself in the mission, an action that brings tragic consequences.

There have been a fair few films dealing with the Chinese resistance during World War II. What is immediately striking about Ann Hui’s ‘Our Time Will Come’ is that, despite sparing no expense at telling the story, there is something quite intimate about this portrayal of a country torn about by brutal invasion. The fact that the story is centred around the impact of the war on Hong Kong makes it a more personal film; Hui resists the temptation to set this in China despite the success of the many productions that have focused on the Mainland. It shouldn’t be a surprise of course because Hui has displayed a deft touch at creating grand themes but never forgetting the human story at the centre.

Although it starts slowly, ‘Our Time Will Come’ really finds its feet in the second hour. An intimate portrait of how war affects people becomes a tension-filled race against time without skipping a beat. Hui’s skills as a director means that the balance is perfectly achieved and ‘Our Time Will Come’ benefits greatly from the woman behind the lens. Even the switching to the older versions of the resistance fighters telling their stories that happens throughout the film works; it could be clunky and awkward, but instead it adds another layer to the production.

‘Our Time Will Come’ has one of Asia’s greatest film-makers calling the shots, but special mention should go to Zhou Xun as the reluctant heroine. Her character faces so many tests and trials, yet remains believable and engaging. This isn’t the sudden turn of an ordinary woman becoming a superheroine by the end – this is the gradual change of a person due to circumstances our own generation can barely imagine. Zhou Xun gives a career-best performance as Lan, coping with all of the varied emotions her character faces with complete assurance. ‘Our Time Will Come’ is another excellent Ann Hui film, but it’s Zhou Xun’s aptitude that lingers after the running time ends.