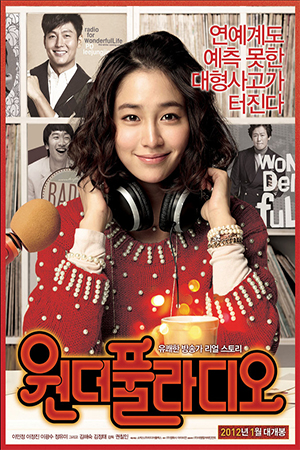 Korean Rom-Coms probably account for more of Korea’s GDP than Samsung and LG combined. Whether it’s on the big screen or the latest K-Drama, the genre is massively populated and tends to follow fairly rigid rules. ‘Wonderful Radio’ is one of the latest off the conveyor belt and, like all good mass produced factory products, is shiny, new and almost identical to the rest of the output.

‘Wonderful Radio’ presenter Jin-A (current hot property Lee Min Jung) finds her ratings at an all-time low as people abandon her station for something more exciting. A former member of legendary girl group ‘Purple’, Jin-A doesn’t enjoy the solo success of one of her former colleagues who is now a successful television presenter and bitter rival.

When handsome new producer Lee Jae-Ik is given the job of turning around the fortunes of the station (and is completely unaware of Jin-A’s pop past), the two clash incessantly until one idea becomes a national success: a sentimental segment where members of the public with a touching story are invited on air to sing a song to the one they love. Not everyone is happy about Jin-A’s renaissance though and a rival producer with his own agenda is determined to destroy her career completely.

Two attractive leads and a needlessly generous two hour running time – ‘Wonderful Radio’ is everything to be expected from a 21st century Korean rom-com. The only problem is the sheer familiarity with the ingredients, giving this reviewer a touch of rom-com gout.

Of course Lee Min Jung is hopelessly adorable as the lead, there are a few laughs and moments that elicit ‘ahhs’. Even some of the healthy dose of sentimentality manages to stir the finer feelings of the most jaded critic. Yet ‘Wonderful Radio’ is less than the sum of its parts and, in a crowded genre, just doesn’t stand out. Pleasant, but instantly forgettable.