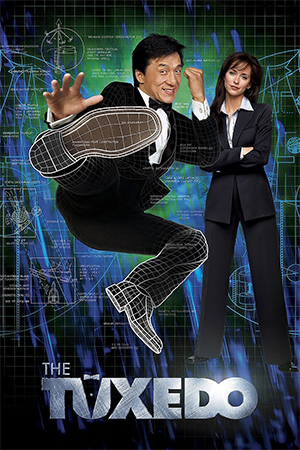 Jimmy Tong (Chan) is a taxi driver who is famed for the speed and skill he shows behind the wheel of his cab. Aside from his risk-taking work, there is little excitement in Tong’s life and he instead drifts into daydreams about the woman who works at a nearby art gallery. Out of the blue, Tong is offered the chance to be the official chauffeur of suave agent Clark Devlin (Isaacs) as long as he promises not to pry into his client’s life. After an encounter with enemy agents that leaves Devlin severely injured, Jimmy Tong is thrust into the mysterious world of his client and entrusted with a special tuxedo. This tuxedo proves to be a specially designed suit that endows whoever wears it with remarkable abilities and gives Tong the chance to live his dreams of excitement. However, thinking that Devlin is still wearing the tuxedo, the superiors team Tong up with beautiful assistant Del Blaine (Love-Hewitt) and instruct the pair to investigate water baron Diedrich Banning. The unlikely partners discover Banning’s plan to pollute the world’s water supply and therefore make his own product the only pure product. It isn’t long, though, before Banning discovers the agents’ plans and, more importantly, the tuxedo’s properties.

There’s was a natural trepidation I felt before watching ‘The Tuxedo’: it’s by far the most ludicrous concept that Chan has been involved in and perhaps heralds the most obvious sign of his ‘selling out’ to the U.S. market. Nevertheless, ‘The Tuxedo’ proves to be a surprisingly engaging caper that side-steps the obvious incredulities of the film. Jackie succeeds in bringing his usual naive charm to the Bond-esque lead role while Jennifer Love-Hewitt proves to be an able foil for the hero. Even in his short appearance, Jason Isaacs also impresses as the suave Clark Devlin and gives a clear indication that he would be a very able James Bond of the future.

The startling weakness of ‘The Tuxedo’ is more to do with Jackie Chan and his current cinematic position, rather than the film itself. The simple fact is that ‘The Tuxedo’ would probably have been just as enjoyable with any other star in the lead role – there’s nothing to say that this is ‘a Jackie Chan film’. Chan’s future Hollywood output is likely to move him even further away from the halcyon days that we all remember so well and there’s a danger that one of the greatest and most unique stars is likely to be just another actor in the U.S. Long-term Chan fans – of which I include myself – certainly don’t expect the fight action and stunts of the ‘Police Story’ era, but at least some attempt to give him some control within the film would be an improvement. ‘Rush Hour 2’ thankfully showed some of the slick moves that are associated with Chan, unfortunately the future indicates that there may not be many more opportunities to see this. Despite the qualities of ‘The Tuxedo’, it may well be the film that is the turning point in his career – a difficult thought indeed.