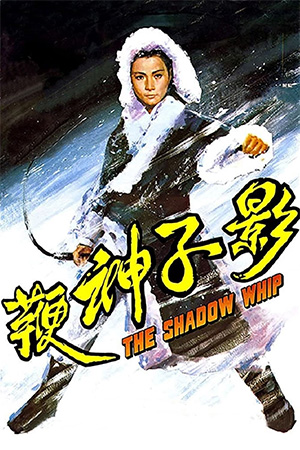 After the significant kudos earned by King Hu’s masterpiece ‘Come Drink With Me’, any re-teaming of its stars, Cheng Pei Pei and Yueh Hua, was surely something to be anticipated. Lo Wei’s ‘The Shadow Whip’ tries to recapture the magic with its casting, but there’s little doubt as to which of the two films is the better.

Shortly after arriving in town, righteously-inclined wanderer Wang (Hua) finds himself involved in a dispute when he defends an innocent man. The ensuing fight sees Wang initially hold his own, but after a few minutes he is outnumbered by hordes of heinous thugs. However, Wang is saved by the timely intervention of Miss Yun (Cheng Pei Pei) who utilises the fabled ‘Shadow Whip’ to save him and her loyal servant who was also involved. Fascinated by the technique Miss Yun uses, Wang decides to follow her in order to learn more and see if her teacher will be willing to pass on the skills to him. When Wang does finally meet Yun’s teacher, Uncle Fang, he is distressed to learn that the discovery of the hermit-like master has alerted vengeance seeking fighter Hong. Gradually, Miss Yun and Wang learn of the conspiracy against Uncle Fang that has made him the most hated man in the martial world. Despite the obvious dangers, both resolve to defend Fang and, at the same time, clear his name.

For ‘The Shadow Whip’ to have been able to stand shoulder-to-shoulder with ‘Come Drink With Me’, Lo Wei would’ve needed to excel himself in such a way that he has rarely achieved. That he hasn’t come close to such an effort is patently obvious by the time the very short 73 minute running time ends. Lo Wei has borne the brunt of much criticism for his directorial style, but films like ‘Dragon Fist’ and ‘Fist Of Fury’ (not including Bruce Lee’s inspiration) have proved that he can be relied on for an above average feature. ‘The Shadow Whip’, unfortunately, is merely routine despite some excellent moments early on. There’s never the same level of consideration afforded to the storyline and characterisations that made ‘Come Drink With Me’ such a great film.

While it fails to ignite the screen, ‘The Shadow Whip’ does offer some moments of interest – especially during its opening twenty minute period. The snow-covered locations create a visually appealing environment for the action to be set against; the stark, cold white of the snow-filled surroundings makes a pleasant change from the usual Chinese backdrops. Having such intriguing vistas to utilise gives ‘The Shadow Whip’ a stylish look that it, unfortunately, fails to capitalise on.

The weaknesses of ‘The Shadow Whip’ cannot really be heaped on any one department. The lead performers, while fairly uninvolving, are not exactly given much help in the flat characterisation they’re landed with. Meanwhile, Lo Wei’s sense of pacing during the film leaves much to be desired; the first portion is well-defined and creates interest, but, soon after, Lo Wei cannot seem to decide how to continue the rhythm of the remainder of the production. While a Shaw Brothers’ feature with these problems may have been partially forgiven if the action was spellbinding, ‘The Shadow Whip’ is uninspired in this area too. The scenes with the eponymous whip are well-handled and certainly offer a different style to most choreography of the time, but there are far too many awkward ‘special effects’ to contend with. Little tricks here and there only add to the feeling that this is an archaic swordplay flick. ‘The Shadow Whip’ is unremarkable film-making that squanders some golden opportunities to be much more.