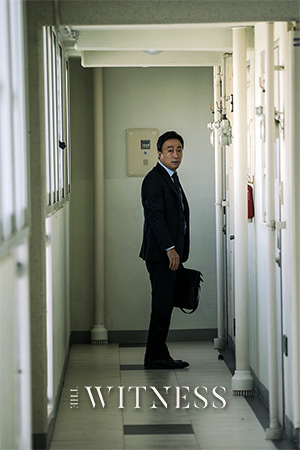 There is something quite comforting about sitting down to watch the latest Korean film or K-Drama and seeing the eccentric figure of Kim Sang-ho appear. With his receding hairline and slight frizzy mullet dangling down his shoulders, Kim is one of the more unlikely stars of cinema. Yet the fact that such a great character actor can be so beloved in the creatively dead 21st Century is a sign of hope for those of us raised on 70s and 80s cinema. ‘The Witness’ is a chance to see Kim at his very best, part-Columbo and part Takeshi Kitano in ‘Violent Cop’.

Businessman Sang-hoon (the excellent Lee Sung-Min) returns home slightly in worse for wear after a night out drinking with his colleagues. Making his way gingerly home, Sang-hoon manages to get back to his apartment but is distracted by the distant sound of screaming from below. Peering over his balcony, the businessman sees a woman being bludgeoned to death and a baseball-capped figure fleeing into the night. But before the killer takes flight, he manages to see exactly where the witness lives. Sang-hoon is initially keen to call the authorities, but the killer begins to exert subtle influence on his life and threaten his family. As detective Jae-yeop (Kim Sang-ho) investigates the murder he begins to realise that Sang-hoon might have witnessed something that fateful night and he too begins to exert pressure on scared businessman. Trapped between a killer, potential eviction after the Residents’ Association demand all of the inhabitants there to deny any knowledge and a suspicious investigator, Sang-hoon must make a decision that will forever change his life.

‘The Witness’ starts with one of the most tightly-wound, tensely constructed opening fifteen minutes of any film of recent years. The desperate victim, the stoic killer and the unwilling witness, the discordant noise, strange angles – it all works so well in setting up this above average effort. While ‘The Witness’ can’t quite maintain that level of heart-in-mouth terror, it manages to build into a very effective thriller. The characters are realistic and have sympathetic worries to consider, the twists keep the viewer guessing throughout and it benefits from Kim Sang-ho at his very best.

What stops ‘The Witness’ from being a truly outstanding genre film is a few glaring plot-holes that stretch credulity – the killer gets an almost supernatural ability to appear just when Sang-hoon is close to making the right decision. There are also a number of questions that are never answered, not just for the sake of mystery, but more to save the writers extra work. Despite this, ‘The Witness’ is a cut above the standard fare and is certainly recommended for fans of thrillers.