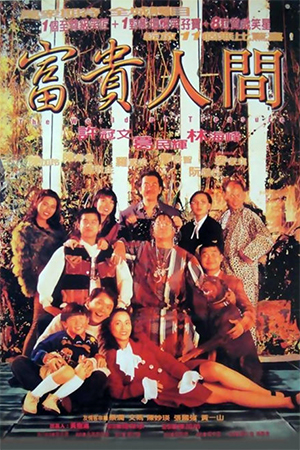 Anticipation arises within an extended Hong Kong family when a long lost uncle decides to travel back from Africa for a visit. The usual sentimental reasons are not the main reason for the family’s excitement, however, as the uncle has amassed quite a fortune since his time away. Therefore each of the relatives has their sights set on a share of the wealth he has accrued from diamond mining; one of the uncle’s dopey brothers wants a significant investment in his lame-brained schemes while one of the nephews hopes to open a sushi restaurant. On arrival, the uncle brings with him the young daughter of his closest friend and laps up all of the attention. In between vying for the money, two of the gold-diggers take an interest in the other visitor and devote a fair portion of their time impressing her too. Eventually the motives of each of the characters becomes obvious to all around them, but the uncle has a surprise of his own that is finally revealed.

‘The World Of Treasure’ is another New Year comedy that follows the usual pattern for such films: a star-studded cast, full of those who are currently popular with the public (hence the appearance of ‘The Hard And Soft Team’ – Eric Kot and Jerry Lamb); a harmless, farce-filled storyline; cameos by other big stars (here provided by Lau Ching Wan). While New Year films are rarely classics, ‘The World Of Treasure’ is especially disappointing. Michael Hui’s name dominates the credits, but his role offers none of the comic excellence associated with his name. The great Hui films work to his strengths and clearly show the hallmarks of his input; here his role is so poorly defined that any actor could have played it without much of an effect on the overall result. Michael’s obvious lack of control means that much of the comedy flounders while uninteresting sub-plots take centre stage. ‘The Hard And Soft Team’ take up most of running time between and, while they’re less annoying than expected, fail to conjure up anything of note.

‘The World Of Treasure’ notches up the odd moment of entertainment during its course and arouses sporadic interest. However, as a Michael Hui film, or even a general Hong Kong comedy it is found wanting.