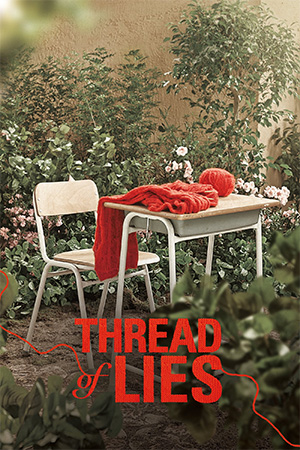 Director Lee Han follows up his hit film ‘Punch’ with another look at troubled, alienated youth, once adapting a popular book for the big screen. Ever topical, ‘Thread Of Lies’ looks at teen suicide and the terrible effects on those left behind.

Schoolgirl Cheon-Ji lives with her hard-working mother and resolutely surly sister Man-Ji in a city suburb. While the drama in the family is provided by arguments by teen daughter and single parent, Cheon-Ji toils away in the background hiding her own difficulties. These are brought forth in the most tragic circumstances though when Man-Ji and her mother come home one day to see the heartbreaking sight of the youngest member of the household dead having hanged herself in her bedroom. The family is devastated and is not only forced to move away, but also has the thoughtless comments of others to contend with. As there doesn’t seem to be an obvious reason behind Cheon-Ji’s suicide and without a note left, Man-Ji in particular tries to piece together the school-life of her little sister and try to understand what drove her to such despair.

Teen suicide is one of those especially painful incidents that never seem to be too far from the headlines; though this is a Korean film, this is a sad subject of modern life that has resonance in every country. ‘Thread of Lies’ tackles the matter in a remarkably understated way which is somewhat reassuring as the topic has been brought to the television and cinema screens in ham-fisted attempts in the past. Lee Han is wary of pushing the easy emotional buttons that are invariably utilised in less successful productions that tread similar ground.

The whole premise of ‘Thread of Lies’ is infused with poignancy, making any descent into histrionics especially unnecessary. The aftermath of the event is dealt with in that gentle way that Asian cinema excels in with that deft touch that makes the big subjects of life quietly affecting (see ‘Departures’, ‘Closer To Heaven’, ‘Floating Landscape’ and others for further evidence). It could be argued that, in the case of ‘Thread of Lies, the subtlety is a minor problem at times: it’s never completely clear what pushes Cheon-Ji to make the terrible decision of suicide and the flashback scenes let a little too much remain unsaid which is an especially frustrating aspect.

‘Thread of Lies’ has its weaknesses, yet mostly succeeds in shedding light on the aftermath of a tragedy. It features a triumvirate of actresses who excel in their varied roles while director Lee Han lets their abilities flourish without needless ‘artistic’ interruptions that belie lesser film-makers. Recommended.