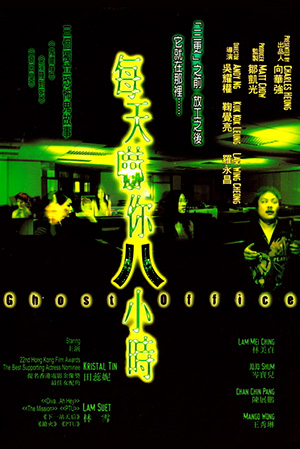 A trio of office bound ghost stories, entailing: “Ghost Invasion” – bespectacled nerdy new kid at Kobe Advertising firm, Tung (Woody Chan) initially feels ill at ease in his new role, largely thanks to the fiery temperament of his manager, Samantha (Stephanie Lam). However, he quickly warms to the position once he’s recognised by former schoolmate Mick (Kenny Lam), who takes him under his wing. Where Mick does nothing but raise the ire of the sassy Samantha for his efforts, Tung swiftly wins her favour with his fresh ideas. Though Samantha appears overly receptive to the new recruit, production manager and latent Feng Shui master Szeto (Matt Chow) warns him that his bad sign indicates an encounter with a ghost.

“The Queen of Gossip” – IT Applications is a small internet firm much akin to any other in Hong Kong, albeit riddled with a scandalous gossip mill championed by favourite “dirty mouth” Amanda (Kristal Tin). Amanda entertains her fellow office girls Cindy (Fion Ho), Julia (Patricia Therese Souza), and twins Sandy (Candy Yu) and Sammi (Florence Yu) with all the latest dirt on a daily basis. Meanwhile, their lecherous manager Martin (Khan Ishtiaq) carries out a private bet with his colleagues to bed every girl he can in a minimum amount of time. By happenstance, elderly cleaner Ling (Hau Wun Ling) forewarns Amanda that her bad mouth will be her undoing, and when her foulmouthed curse on Macanese-Portuguese employee Egg Tart (Santos) unexpectedly come to pass things go inevitably pear-shaped.

If you’re looking for an entertaining ghost flick, this China Star Entertainment pick-up of a shelved 2001 S & W Entertainment production is hardly the go in the greater scheme of things. Undoubtedly released on the back of the moderately successful anthology piece ‘Haunted Office’ (2002), and lifting its structure from the (once) popular ‘Troublesome Night’ (1997) horror series, upon immediate perusal it’s not hard to determine exactly why this Matt Chow production spent two years gathering dust in China Star’s acquisition vaults. Limited production (and entertainment) values, as well as an unceremonious dumping as a direct-to-video DVD release through Mei Ah Entertainment in 2003 should trigger the appropriate alarm bells. Put simply, ‘Ghost Office’ is diabolically terrible and full well deserving of its consignment straight to video hell, as it stands as a true indicator of the worst of Hong Kong’s anthology horror titles. Perhaps the only marketable element of the film, heavens forbid that one would recommend a film on such trivialities, is seeing the uniformly attractive cast of starlets flit about the screen clad in figure-hugging attire (more often than not benefited by plunging necklines). But realistically, that is maybe the only ambiguously noteworthy asset this production offers a prospective (male) audience.

Andy Ng’s opening tale, “Ghost Invasion” is the only mildly diverting short amongst the three and on low-key value it was peripherally engaging to see ‘Bullets Over Summer’ (1999) actress Stephanie Lam hamming it up as the sultry Samantha, in a modestly rewarding array of revealing attire. Like the remainder of the stories, “Invasion” is attractively lensed by Ardy Lam (of ‘Iceman Cometh’, 1989, and ‘Bullet In The Head’, 1990 fame), yet the woodenness of its leads Woody Chan and Kenny Lam paired with some annoyingly confused editing (what’s fact and what’s fiction is left entirely in the hands of the viewer) ultimately steers it into a lumbering clunker only exceeded in banality by its successive tales. “A Horny Ghost” is partially enlivened by a throwaway cameo from Johnnie To regular Lam Suet; however once he is jettisoned in the film’s most absurdly “creative” moment, episode director Kuk Kok Leung falls back on his entourage of damsels in distress for the story to sluggishly skulk towards its finale. Purveyors of silicone will find much to ogle while busty starlet Lee Lou wrestles valiantly from completely spilling out of her generously brief pink dress. As for “The Queen of Gossip” there’s naught to recommend of it bar longingly gazing as its lead actresses while they leadenly go through the motions under Law Wing Cheong’s workmanlike direction.

Clearly a set of well-intentioned, though poorly executed, morality plays (being, in sequence, “never judge a book by its cover”, “never scoff at some-one else’s dreams, no matter how absurd” and “being an office gossip always leads to a sticky ending”), ‘Ghost Office’ proves itself in the long-run to be an enormous flub. Even though two of its episodes offer unexpected and surprising sting-in-the-tail twists, there isn’t a shred of anything remotely resembling hair-raising scares throughout the film’s entire duration and the “scares” that are present are played strictly for laughs. Accordingly, for the most undemanding of viewer the aforementioned “eye candy” angle and a bevy of gratuitous breast jokes may satiate their entertainment requirements, but for this little black duck I was wholly unimpressed. Those interested in reasonably engaging ghost anthologies would be far better served seeking out Wellson Chin’s nineties “calendar” horror series or even any of the early entries in the ‘Troublesome Night’ series and leave this well enough alone.