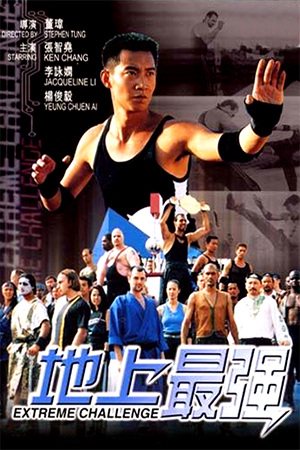 For a film that only lasted a week at its local box office and flopped badly, ‘Extreme Challenge’ has already gained a minor reputation in the UK prior to its release. Covered in a number of UK magazines as a return to the tournament style of movies, people are obviously excited remembering such classics as ‘Bloodsport’ and of course: ‘Enter the Dragon’ (in which EC’s director, Tung Wai, can be seen receiving instruction from Bruce himself).

It is clear that those buying this film are interested in one thing only – good fights, and for the most part EC delivers. There are a number of fight scenes, and they are based in reality, with grounded, realistic fighting techniques. Many weapons are also on show, from Escrima to fan favourite Nunchaku’s, and each bout is intricately choreographed and well executed, but something is still lacking. Ultimately, the fights are not exciting enough, and the choreography, while intricate, is not exciting. Little utilisation of flashy kicks or gymnastics reduces the “Wow” factor and only a couple of fights really impress.

The worst part of the movie overall is the dialogue. Plain and simple, it is cringingly atrocious! The dubbing of certain actors is diabolical, and most of the conversations are in English. I for one would prefer a return to the good old days, when everyone spoke Cantonese. At least it sounded more natural, and was to be expected from a Hong Kong movie. Instead we see actors struggling with the words, or being dubbed by monkeys. I expect the average movie fan would be unable to sit through it!

As long as you don’t expect too much, there is enough interesting action, and impressive choreography on show to entertain you. However, it is unlikely that this would be watched from start to finish more than once. I have given it 3 stars for the fights, but if I was to base my score on the dialogue, it may have only received one!