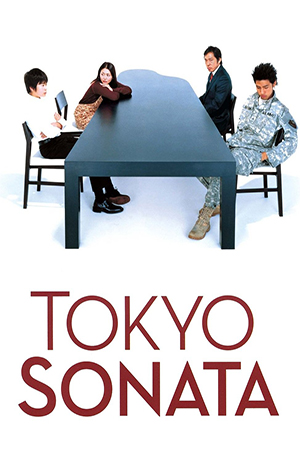 Ryuhei Sasaki (Kagawa) is the head of administration at a company selling medical supplies, a job that gradually hebetates his interest in life and his family. When he is made redundant though – an after effect of company ‘downsizing’ – the only successful strand of his life is severed completely. With a typically Japanese view of failure and defeat haunting him, Ryuhei decides to keep his situation private, pretend he is still going to work everyday and give his wife the housekeeping money out of his final work payments. Day after day Ryuhei rubs shoulders with the many looking for work, even frequenting the queues for free food given to the local homeless.

While the man of the house secretly tries to find work without arousing suspicion, his wife quietly allows the frustrations of life to wash over her. Her eldest son is barely on speaking terms with his dad and hardly exerts himself in finding work, while the youngest feels marginalised in a house where he feelings are elbowed aside. When the former joins the army and it is discovered that the latter has used his lunch money on piano tuition, the veneer of silent acceptance is scratched and each of the four members becomes isolated by their own inability to communicate properly with the others.

Though the name Kiyoshi Kurosawa is usually connected to psychological horror films that may seem the thematic antithesis to ‘Tokyo Sonata’, this withering drama has the dark edge that brings it in line with his other works. The director of the ‘Kairo’ aims his fiery artistic arrows at Japanese society, alienation (a theme very significant in his earlier works) and the way the traditional inevitably clashes with modernity. That latter idea may recall Ozu’s grand themes and there may be some cause to feel the execution is an allusion to the Japanese master. Yet Kiyoshi Kurosawa ploughs his own furrow and takes the story off on numerous interesting arcs.

‘Tokyo Sonata’ looks at the gradual dismantling of the nuclear family and, as intentionally underplayed as it is, hides a powerful undercurrent. The plight of Mr.Sasaki is bitterly painful at times as he trundles through the elaborate masquerade that is everyday life, yet it as much a critique of Japanese society as it is the fall of a proud man. In a society where ‘success’ is directly connected to social status (not that the materialistic western world can be too smug when watching this) and ones occupation, the unravelling of the protagonist’s dignity is fascinating though hardly pleasant. Sasaki’s utter shame at taking on work as a ‘mere’ cleaner is a mirror of the stratified society around him as much as it is of the lead’s pride.

As the ripples from the father’s implosion begins to wear away at the other three members of the Sasaki family, sympathy switches to the youngest son, very well presented by newcomer Inowaki Kai, and the slowly fading matriarch Megumi. The cast fulfil these meaty roles with uniformally superb performances. Yet ‘Tokyo Sonata’ is not a Bergman-esque slog through privation and internal agony. Even when events take even darker twists, Kiyoshi Kurosawa throws in a few witty asides and brings humour into the most unlikely scenarios. Asian cinema is unique in its ability to turn mood and emotion around in just a few frames and Kurosawa ensures that this tradition is well maintained.

An outstanding drama and so much more, ‘Tokyo Sonata’ is captivating arthouse cinema. With hints of optimism shining through as the story draws to its conclusion, Kiyoshi Kurosawa includes a few surprises that prove memorable beyond the last few frames. Highly recommended.