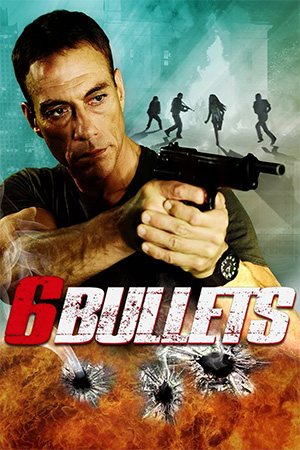 After the daughter of mixed martial artist Andrew Fayden (Joe Flanigan) is kidnapped in a foreign city, he quickly finds himself running out of options. That is until he hears about Samson Gaul (Jean-Claude Van Damme), a former mercenary who retired after his actions resulted in the deaths of some helpless victims. Although he is initially reluctant to get involved, Gaul is moved by the plight of the parents and agrees to do what he can. Little do they realise though, that Gaul is a man willing to put everything on the line to complete his mission and he is about to unleash hell on some unsuspecting villains.

While it may not be the most original piece of low budget action cinema, ‘6 Bullets’ is a fairly well put together effort. The somewhat generic redemption plot acts as a solid springboard for the action set pieces and there are plenty of opportunities for Van Damme to flex his dramatic muscles. This is particularly applicable to the opening third of the film, in which we see our hero struggling to come to terms with his demons. This surprisingly slow build up really helps to flesh out the character and it makes it all the more satisfying when he finally decides to leap back into action. Unfortunately though, it does all start to unravel a bit once the parents get more heavily involved. I appreciate that they are willing to do anything to get their daughter back, but the idea of them suddenly becoming secret agents who murder at will just feels like a step too far.

On the action front, ‘6 Bullets’ offers a slightly different Van Damme than we are used to seeing. Gone are the slow motion jump kicks and roundhouses of the past, and instead we get a faster paced and more close contact series of fight sequences. While it’s definitely not as flashy, it is pretty well handled and much more in keeping with the assassin character that he is playing. Sadly, the amount of hand-to-hand does seem to subside fairly quickly, but the few scenes we do get are very pleasing to watch and I particularly appreciated the arrogant little weapon flips that Van Damme does after dispatching of a group of enemies. As for the remainder of the action sequences, they’re mainly shootouts which are adequate but nothing outstanding. It’s a shame really as a bit of final fisticuffs with a central villain would have made for a great ending, but instead it just wraps everything up in a compound with a fairly generic bit of gunplay.

‘6 Bullets’ is a decent little action B movie with a couple of enjoyable fights and a fine performance from Van Damme as the grizzled assassin. It’s perhaps not as action packed as it could have been, but it definitely makes for a fun time killer.