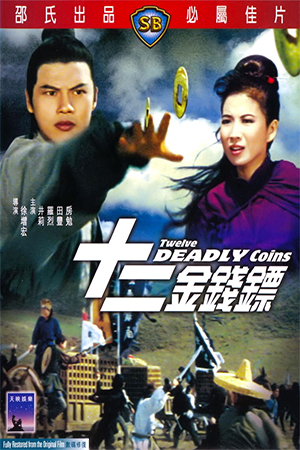 Arriving as a re-release on DVD with a significant cult following among genre fans, ‘Twelve Deadly Coins’ was eagerly awaited by those of us who had never had the opportunity to watch it. Made during the early heyday of the Shaw Brothers’ swordplay, the cast boasts Lo Lieh and Ching Li before their respective ascents to greater fame. The question for so many of these adored productions of the past is how well do they really stand up over thirty years later.

Yu Chien Ping’s escort agency is noted throughout the region for its reliability, mostly thanks to the famed ‘Coin Throwing’ technique of its owner. The latest commission for the business is the transportation of 200,000 gold taels through bandit country and entrusts the task to his most senior student, his daughter and a handful of men. Accompanying them is Qiao (Lo Lieh), humble worker, but formidable fighter who agitates a seething animosity in his employer’s senior pupil. Chiao hopes to advise the convoy where to go for maximum safety, but his rival ignores his advice and subsequently leads the team straight into an ambush. The mastermind behind the crime is the old enemy of Yu Chien Ping and his gang of thieves not only lay waste to the agency, but also take the considerable treasure to their hideout. Qiao sets out the retrieve the goods, using stealth to find the villain’s lair, but is unaware that he is being touted as the likely culprit for the robbery.

Starting with an ambience that alludes to the great Spaghetti Westerns, ‘Twelve Deadly Coins’ initially feels like a very different kind of swordplay flick. Moody close-ups, quick Chanbara-like movements, a grandiloquent villain cackling away and atmospheric soundtrack all play over the beginning credits to stoke up the anticipation for what follows. Unfortunately, it is soon after this promising opening that Chui Chang-Wang’s film reverts to a very familiar type, dispensing with innovation in favour of the usual swordplay clichés.

‘Twelve Deadly Coins’ is packed with genre favourites with the ubiquitous Tien Fong handed a meaty role and Lo Lieh allowed to enjoy his time as a hero. The characters they play, though, are weakly written with little to explain their actions or loyalties. Lieh’s character Qiao is the archetypal chivalrous knight, a hero who it is easy to warm to because of his noble-minded nature and humility. It does transpire, however, that such admirable traits have been forged into a melodramatic frame with none of the charm that is needed to pull it off. Qiao’s romance with Rung Er is forced into one scene, forgotten about, recalled etc and it becomes obvious that such sub-plots are merely thrown into the mix with little care.

Perhaps the greatest flaw found within this well-made, yet uninspiring swordplay film is its reliance on theatrical melodrama rather than tension or real emotion. All of the actions in the later scenes are larger-than-life and belong in a Peking Opera production rather than on the screen. It is therefore difficult to be swept along by the story while it wallows in febrile drama and amateur dramatic posturing. It struggles in the same way many late 60s-early 70s swordplay films do to modern eyes. Chui Chang-Wang does try to flesh a few of the antagonists out with their own shady motives, but this quickly reverts to the usual flailing sword confrontations with the hero.

Made just a year later, the similarly titled ‘Twelve Gold Medallions’ showed just how a tightly-directed, well-acted genre flick can be made from popular ingredients. ‘Twelve Deadly Coins’ though seems rather archaic in that company and undeserving of its reputation.