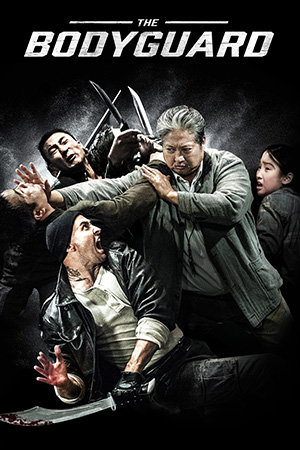 As I get older, I find myself drawn to stories about people who choose to battle the aging process with fists, feet, and high-grade weaponry. Sylvester Stallone’s Expendables franchise scratches that itch on a superficial level, though Michael Caine’s Harry Brown and even Clint Eastwood’s Gran Torino (to a much lesser extent) provide a more satisfying depiction of badasses who don’t allow their ages to stop them from dealing out a considerable amount of damage when the situation arises. What can I say: I’m a sucker for older guys smacking the younger generation around.

Sammo Hung, whose physical prowess makes me feel like a lump of unmolded clay rotting away in an unmotivated, unkempt artist’s cluttered studio apartment, tackles such a scenario in the 2016 action-drama ‘The Bodyguard’. However, action junkies who need non-stop fights and endless explosions will no doubt walk away from this experience feeling crushingly underwhelmed. Although we’re given a brief exchange between our hero and a pair of nefarious punks about halfway through the story, the majority of the Hung-oriented scraps are lumped into the film’s third act. It’s well worth the wait, but you’ll have to wade through plenty of drama, comedy, and some drastic shifts in tone to get there.

The movie’s success hinges on Hung’s turn as Ding, a retired Central Security Bureau agent suffering from dementia who moves to a small town after his granddaughter goes missing while under his supervision. Since his family ultimately disowned him, Ding leads a fairly solitary existence, with the exception of frequent visits from of his neighbor’s spunky kid, Cherry Li (Jacqueline Chan), and his landlord (Qinqin Li), the latter of whom desperately wants to marry our hero and take care of him during his twilight years. Ding tolerates the life he lives to a certain degree, but it’s obvious that the granddaughter’s disappearance haunts him day and night, and his relationship with Cherry almost serves as a kind of replacement.

Things kick up a notch when Cherry’s dad (an extremely smarmy Andy Lau) gets in deep trouble with the local crime boss for stealing a bag filled with expensive goodies. The goons end up threatening Cherry’s life, prompting Ding to take matters into his own hands. This setup essentially drives the film’s action-packed third act, though some claim it’s too little too late by this point. And just because Sammo’s getting up in age doesn’t mean he can’t hang with the younger cats, though it’s obvious he brought in a noticeably slimmer stunt double for some of the film’s more elaborate choreography.

While enjoyable, ‘The Bodyguard’ isn’t without its fair share of problems. The overall lack of thrilling fight scenes makes the flick feel more like a family-oriented drama than an action movie. And while the story’s reliance on silly animation, touching moments between Ding and Cherry, and a few bursts of subpar comedy suggest the film is family friendly, there are certainly a few unsettling moments sprinkled throughout the flick. One such scenario involves Andy Lau, and the severity of the scene seems completely out of place with the rest of the movie. I won’t say too much, but trust me — you’ll know it when you see it.

Your enjoyment of ‘The Bodyguard’ relies on one thing: managed expectations. This isn’t your typical Sammo Hung flick, nor should you expect the big guy to bring the pain like he did during his younger days. The fights aren’t nearly as elaborate, and the film relies more on smaller character moments than wall-to-wall action. That said, I appreciated the story’s quieter moments, from Ding’s struggle with dementia to the heartwarming interactions with Cherry. It’s not a perfect film by any means, but it succeeds in painting an interesting portrait of an aging gentleman looking for a little redemption. It’s a solid character study, but it’s definitely not an action flick.