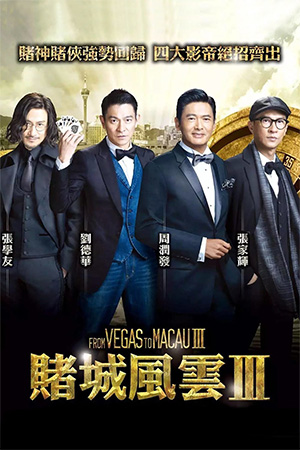 Having defeated his last challenge, Magic Hand Ken (Chow Yun-Fat) looks forward to a return to normality with his only concern now being the preparation for the wedding of his daughter to his protege Vincent (Yue). However, the event is rocked by an attack that leaves both the bride and groom critically ill and persuades Ken and Mark (Nick Cheung) to try and find who was responsible. The villain behind the events is unhinged tycoon JC (Jacky Cheung) who blames Ken for putting Molly (Carina Lau, returning from part II) into a catatonic state and as the card-throwing heroes get nearer to the truth, JC pulls out all of the stops to destroy the them before hand. Thankfully, Dagger (Lau), legendary apprentice to Ko Chun, is on hand to offer support against the most determined and destructive foe that Ken has ever faced.

‘From Vegas To Macau III’ is more bearable than its predecessor: never before has a work been so damned by feint praise. Packed with the deluge of banality and popular references that will doubtlessly age the film well before it’s time, this third part is every bit as frustrating and lazy as the one that came before it. And yet, perhaps due to the merest de-sensitisation on my part the way a public flogging probably loses its pain after the umpteenth time, this latest instalment of Wong Jing’s absurd vandalism of his own ‘God of Gamblers’ films didn’t leave me quite as angry.

It might be the lack of forced pathos or the gradual resignation to what’s to come that makes ‘From Vegas To Macau III’ slightly less arduous. That said, sitting through this slipshod, scattershot, blunderbus of cultural references is still as tiresome as being constantly beaten on the head with a baking tray. The familiarity of the allusions and the celebrity cameos doesn’t make this any less wearing; Wong Jing thinks that inserting Gangnam Style phenomenon and neurological weapon Psy on his audience makes his work cutting edge, but it really doesn’t. ‘From Vegas Tom Macau III’ features more mugging by the stars involved than a ‘Three Stooges’ convention though is much less fun.

The main problem, despite the idiotic comedy, hammy performances by screen legends like Chow Yun-Fat and Andy Lau, the moronic plot and the obsessive need to appear ‘relevant’ is that it would appear that Wong Jing hired a comatose octogenarian to do the editing on this. Scenes that were never that exciting to begin with stretch out for an eternity and even ten minutes feels like a ten hour viewing of ‘Last Year In Marienbad’ but without the artistry. One particular scene at the end, which features Andy Lau clones and robots fighting in the most uninspiring way, goes on longer than the Battle Of Yom Kippour. It just goes on and on, like some kind of surgery you wake up in the middle of as the pain relief wears off.

‘From Vegas To Macau III’ was a massive hit so expect another sequel before this review is committed to the hard drive. Yes it’s nice to see Chow Yun-Fat and Andy Lau together on screen again despite the results. It’s pleasant to see nods to ‘Prison on Fire’ (at least for the first thirty seconds). Yet the fact that a fourth film is hurtling towards us at increasing speed is reason enough for sleepless nights.