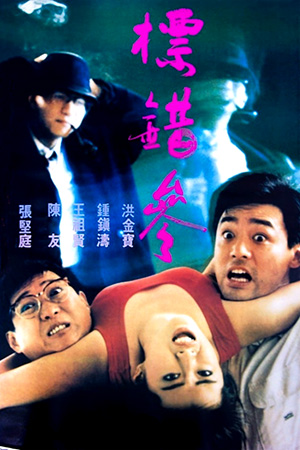 Ting (Sammo) is the scapegoat for all of the failings of his greedy company and finds himself constantly berated by the domineering wife of his boss. Finally at the end of his tether after taking the blame for a robbery of the company’s diamonds, Ting decides to get revenge and make some quick money at the same time. He therefore concocts a plan to kidnap his main tormentor and issue her husband, his employer, with a ransom demand. Unfortunately for bungling would-be kidnapper Ting, he remarkably manages to snatch the wrong woman and instead takes his boss’ young daughter (Wong). To add to his problems, his actions have not gone unnoticed and a fellow worker at the same company, Piao (Bee), blackmails Ting for a share of the ransom money. The two, though never meeting, gradually devise a way to get the money from the victim’s father without getting caught. However, Piao also starts to warm to the kidnapped woman, therefore causing problems for the money-hungry scheme.

Sammo Hung has carved out a reputation as one of the great stars of Hong Kong mainly on the back of his exceptional action comedies. ‘To Err Is Humane’ is a slight change of pace from these as it is a straight comedy that relies on simple farce rather than action. Therefore the cast are familiar faces within this particular field and are clearly designed to create the light-hearted atmosphere that Alfred Cheung often utilises. Sammo’s acting skills mean that he is equally at home with comedy as he is with drama or action; he fits perfectly into his non-action role and maintains the vital pathos the character needs throughout. Within the aforementioned cast there’s enough talent to also help Sammo’s efforts in the lead role and his interplay with Kenny Bee is a particular asset. ‘To Err Is Humane’ is a more subtle use of the usual Hong Kong farce conventions which therefore makes for easy viewing.

Those expecting the sublime mixture of fisticuffs and fun as was seen in classics like ‘Pedicab Driver’ and ‘Millionaire’s Express’ will certainly be disappointed; Alfred Cheung’s directorial style is distinctly focused away from these. Nonetheless, ‘To Err Is Humane’ provides further proof of Sammo Hung’s versatility and makes a pleasant addition to his vast filmography.