A second collection of villains who make old school kung-fu films so darn wonderful. It’s by no means an exhaustive list and there are a few notable names missing, but feel free to send us a missive championing your own beloved scoundrel… 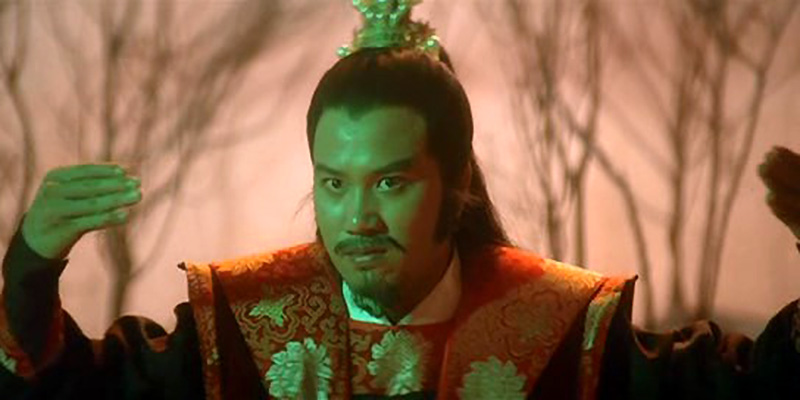 HE’S SCARY BECAUSE: For sheer monumental power, Dugu Wu Di is a bit special. His ‘Invincible Style’ (a bit boastful to be fair) enables him to fire laser bolts from his hands, bounce off walls and cackle beautifully. He regularly goes into complete seclusion for years at a time to reach the next level of his chosen style and becomes impotent as a result – that is how serious he is about his craft!

FEF RATING: 4 stars – A tad obsessive with beating the Wu Tang clan it has to be said – it’s all the rascal talks about! And with one glittery blue hand and one glittery red one (beneath his fetching gloves) is a bit too much of a metrosexual for the old traditionalists. Nevertheless, he gets two chunky films to show his stuff and is almost invincible (if it weren’t for that pesky cough). 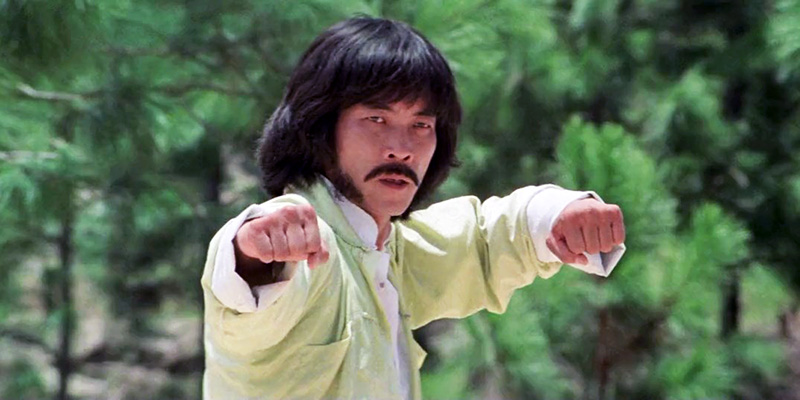 HE’S SCARY BECAUSE: From his first few steps in ‘Drunken Master’, you know that Thunderfoot is the business. He swaggers arrogantly, spouts cocky one-liners and unleashes flying kicks that could knock down a brick privy house. Along with Charles Bronson he was one of the men who made the handlebar moustache look cool.

FEF RATING: 4 ½ stars: Undone by his arrogance when letting Jackie Chan’s Wong Fei Hong go (having kicked him into oblivion and questioned his parentage) only to have the eventual Drunken Master come back to kill him – classic bad guy mistake. A very conscientious hitman though and with a neat range of insults to fire at any potential victim. 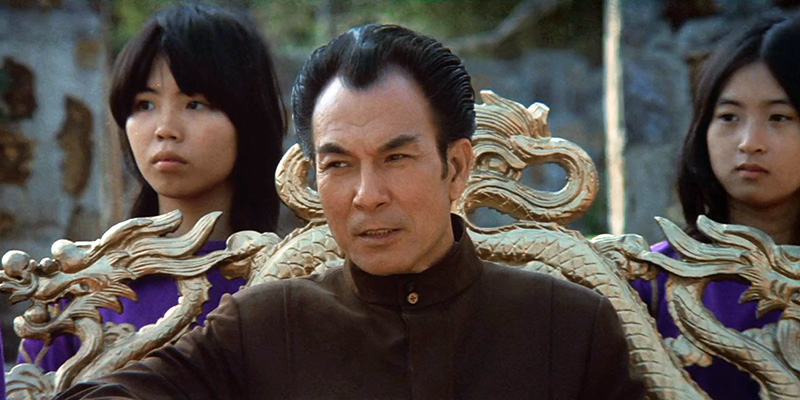 HE’S SCARY BECAUSE: Long before Richard Branson, Mr. Han had his own island (‘an island fortress’ according to the Lonely Planet Guide of the time), a private army and interests ranging in heroin smuggling and slave trading. And he throws a mean banquet (if you’re fortunate enough to get an invite). And he has a detachable hand – an invention that would go on to be the most sought after toy for children in 1973.

FEF RATING: 3 ½ stars: Another villain who prefers outsourcing the brutality and while that is to be respected, he only really leaves the comfort of this throne to beat poor old Jim Kelly up, put his poor cat in a guillotine and fight Bruce Lee in that rather swish mirror room (later used in ‘What Not To Wear’). 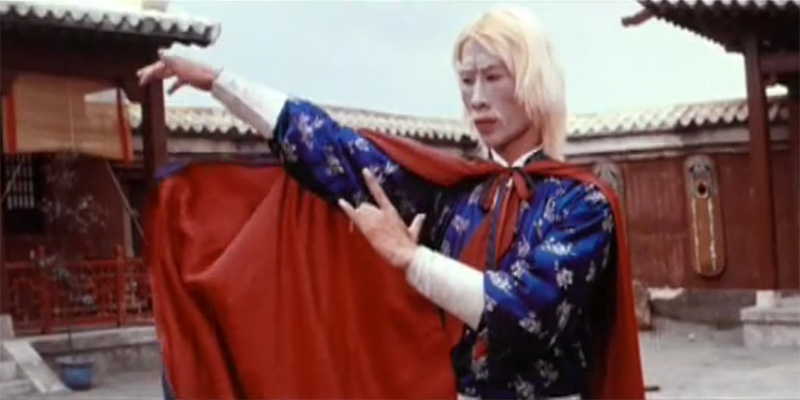 HE’S SCARY BECAUSE: Any villain who struts around in a cape earns instant applause from Far East Films, but Lu Ping is also furnished with platinum blond hair and a generally terrifying demeanour. Like Mr. Han he has his own private army (though can only dream of his own island) meaning he doesn’t get too involved in the nuts and bolts of his craft, but when he does fight he is like a rabid bear with its foot caught in a rusty trap.

FEF RATING: 3 ½ stars: Robert Tai is a bit of a cult hero to genre fans anyway and Lu Ping is a good introduction to his unique brand of hair dye and lunacy. 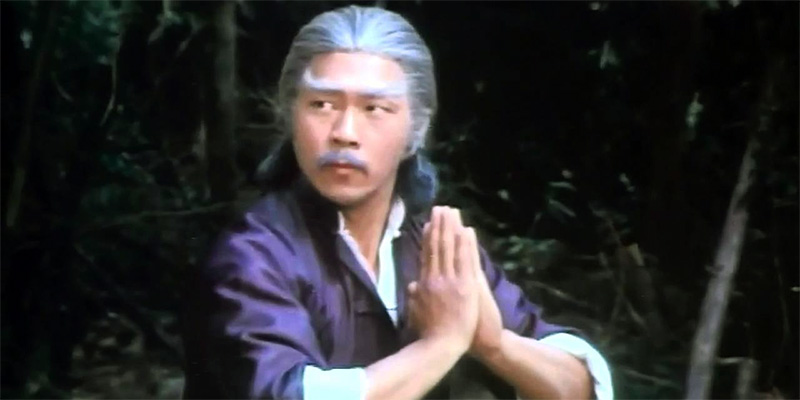 NAME: THE CHIEF (played by Johnny Wang Lung-Wei)
FILM: Two On The Road

HE’S SCARY BECAUSE: He is another one of those villains who pretends to be infirm, perhaps as an elaborate benefits fraud though this is never explained. However, when The Chief is unmasked as the killer (not really a spoiler – he’s played by Wang Lung Wei so what did you expect of him?) he hammers his adversaries into the ground with barely concealed glee. He manages to take on Leung Kar Yan and Philip Ko single-handedly at the end and look rather elegant in the process.

FEF RATING: 4 stars: Any list of this nature needs a Wang Lung Wei villain and
‘The Chief’ is a fine inclusion. He plays on the lame innocent bit a tad too much, but his ten minutes at the end of ‘Two On The Road’ is a superb piece to put on his c.v. 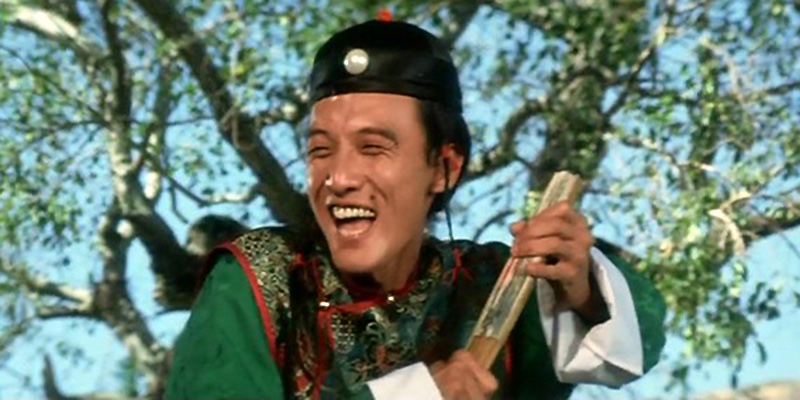 HE’S SCARY BECAUSE: A weird deviant with a hunchback who rocks back and forth as he walks along – not much of a scary villain, but would you let him babysit your children?

FEF RATING: 1 star: With his hairy mole and general Dean Shekness, Master Rocking is a rather big annoyance who gets a well deserved smack from Sammo Hung and Liu Chia-Yung.

Latest posts by Andrew Saroch (see all)
You Must Be Tired Of Living!