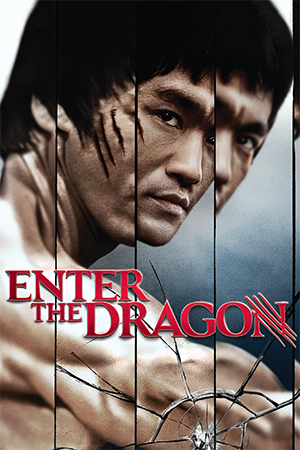 Every ten years Mr. Han (Shek Kin) stages a no-holds barred tournament to find the finest talent from the fighting world.  Lee (Bruce Lee) is enlisted by an elite syndicate to enter the tournament in an attempt to uncover Han’s secret drug running operation.  However, Lee also has ulterior motives; his sister was murdered by Han’s underling and he is looking for revenge. With the help of two fellow competitors (Saxon and Kelly), Lee wages war on Han and his army.

Borrowing heavily from the James Bond back catalogue, ‘Enter the Dragon’ is a campy and extremely entertaining action romp that is successful because of two important ingredients – Bruce Lee and Martial Arts!  Up to this point in time, kung fu of any kind had rarely been seen outside of the Far East and ‘Enter The Dragon’ introduced it to a whole new audience. The added bonus here was that it was being performed by Lee, a hugely charming and talented individual who was at the peak of his physical condition. Considered by many to be the Asian equivalent of James Dean, this was the film for which Lee will always be remembered and the one that continues to be imitated to this day.

Those of you familiar with Lee’s previous work will know exactly what to expect when it comes to ‘Enter The Dragon’s fight scenes. Lee’s choreography was never exactly what you would call intricate or complex, but he housed such beauty and perfection within every motion that it was always a treat to behold. The real difference between ‘Enter The Dragon’ and his Hong Kong outings is the budget, as with money comes time and man power that allows for experimentation.  With ‘Enter The Dragon’, we are treated to a multitude of slick and dramatic fight scenes, including one particularly outstanding sequence in which Lee takes on numerous opponents using nunchuks.

Sadly, Lee passed away shortly before the release of ‘Enter The Dragon’ but the world was hungry for more. Filmmakers and actors alike attempted to capitalise on its success, and this led to the birth of the genre affectionately known as “Bruceploitation”. However, the majority of the films failed to successfully recreate the winning formula simply because no one could recapture the magic that Lee delivered.

Although I personally believe ‘Fist Of Fury’ remains Lee’s finest hour, ‘Enter The Dragon’ is probably his most accessible movie. There’s plenty of Eastern style action mixed in with the distinctly Western approach to filmmaking, allowing for a more globally translatable movie that can be appreciated by all.