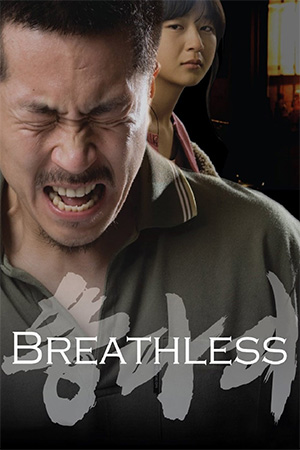 ‘Breathless’ or  ‘Ddongpari’, supposedly translated as ‘shit-fly!’, is a South Korean film written, directed and starring Yang Ik-June. It follows in the cinematic wake of ‘Blood And Bones’ or ‘Nil By Mouth’ in an exploration of domestic violence, only this time set against a backdrop of working class South Korean family life and seedy low-level crime.

Sang-Hoon is the lead character, a fellow raised and conditioned himself by abusive circumstances. Conditioned by such, he himself becomes a rolling thunder of rage, dishing out fists and profanity to anyone that crosses his path, even his young nephew. He gets by in life by working as a leg breaker for a loan shark and seems an unstoppable, out of control thug until he crosses paths with a high school girl called Yeon-hee played by Kim Kkobbi, a regular face in recent years. After a confrontation that involves spittle and slaps, Sang-Hoon finds himself owing Yeon-hee for his assault and perhaps due to her equal foul mouth and attitude, becomes a vague companion at her request. Yeon-hee is also the product of a broken home, living with her victimised mother and when Sang-Hoon’s jailed father returns home, they find themselves mirroring each other’s situations and behaviours.

The film carries on down a winding road of raised fists and black eyes but maintains a battered humanity as well. It is a story of misfits lost in a world of broken homes and unpaid debts where you go the chance of getting done in with a hammer. Yet it never forgets people also, Sang-Hoon has an extreme friendship with his boss, battering fellow employees who have anything bad to say of the man and in one of my favourite scenes, Sang-Hoon goes to the carnival with Yeonhee and nephew. This sequence is scored with child like music, feeling like a slice of whimsy in such a street level, gut punch of a film. Indeed it feels like a Kitano break, or a Johnnie To lull where the film’s protagonists let their hair down, kicking paper footballs or playing on a beach, trying for a moment to forget the violence that lurks around the corner.

The film’s violence is never done in Grand Guignol style, I would not say it was ever for the sake of it, say as in the film ‘Soo’. Taking in constant punches, slaps, shoves and hammer blows along with a torrent of a Larry David level swears ‘Breathless’ is not for the easily offended. Filmed in a rough style, ‘Breathless’ lacks the slick style of recent Korean output and is more a throwback to the late nineties of Hong Kong, the loose camera style is more indicative of Fruit Chan’s Hong Kong trilogy than say ‘Thirst’. It is a long movie, but never feels as such, it keeps on rolling along, keeping you invested in its characters and story, it held my attention as much as prime Scorsese does. As much as I love Asian genre cinema, it can lack character depth but Yang Ik-June brings that to the table in spades.

A modern classic for sure.