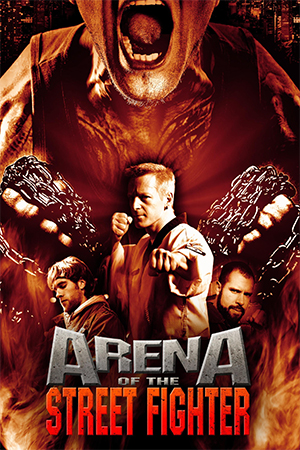 In a violent and lawless city, the streets are dominated by a ruthless gang known as the Bloods. Led by the brutal murderer named Slater, the gang rule with an iron fist and kill anyone that gets in their way. Mikey and his friends operate outside of these rules, getting into fights at every turn and causing trouble with all of the wrong people. When Mikey’s peace-loving brother is killed, he discovers a new purpose in life – revenge. Now Mikey begins training his mind and body as he prepares for a bloody showdown with his toughest opponent yet.

Right from the off, it’s fairly evident that ‘Arena Of The Street Fighter’ takes the term “action movie” a bit too literally. The film throws the viewer straight into a fight sequence and that is pretty much the shape of everything else to come. What little plot we do get is very weak and disjointed, with most of the dialogue being ripped straight out of a bad soap opera. Similarly, the acting is well below par, even taking into account that most of the actors aren’t speaking in their native tongue. All of the interactions feel like some kind of awkward after school special and you spend more time cringing than actually paying attention to what they are saying.

Thankfully, a few of the action scenes on offer are still worth the admission price alone. Unsurprisingly, it is Möller who is the standout performer here and he definitely has the potential to do something big within the industry. All of his bouts showcase a good variety of moves and his kicking combos only seem to get better as the movie progresses. Unfortunately though, this is pretty much where the positives end as the overall picture isn’t quite as pretty. As shocking as it may sound, the main problem is that the film just has too many action scenes. We get bombarded with one pointless fight scene after another, to the point where you actually stop caring about who wins or loses. There’s also just a touch too much inconsistency in the quality, and for every one good fight you have to suffer through two or three mediocre/bad ones.

‘Arena Of The Street Fighter’ had the potential to be a solid showcase for martial arts action, but sadly it is just too poorly cobbled together to truly entertain. The limited plot makes it impossible to get involved with any of the characters and the sheer volume of fight scenes quickly forces them to become tiresome. A shame really because there was enough talent involved to do a hell of a lot better.