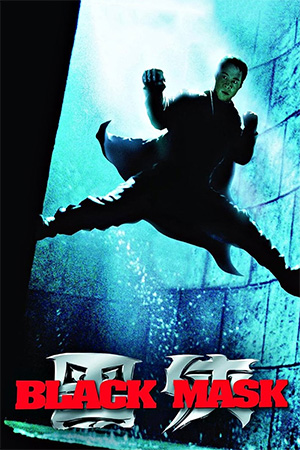 Jet Li’s ‘Black Mask’ has attained a somewhat cult following in the West, despite not performing that well at the local H.K box office. This is perhaps due to the comic book nature of the film, translating better to American audiences than more traditional, superior fare such as ‘OUATIC’.

The story isn’t complex, and basically follows Jet as a member of an elite team – “The 701 squad” – who has had all pain receptors removed to help him become an ultimate fighting machine. However, Jet has broken free of his former life, now peacefully working in a library, but it is only a matter of time before his past catches up with him! As with most HK actioners, the story takes a back seat, and plot holes are easy to pick at. To do that would defeat the point of this popcorn fight fest, and Woo Ping’s style is again on hand to impress. Unfortunately, Woo Ping’s excellent wirework is spoiled by the director, who has adopted the much maligned, yet strangely favoured, Hollywood MTV-style editing. It is far too choppy and spoils the flow of the fights, especially when fans of the genre love to watch extended sequences to marvel at the physical performers.

It is common practice to use camera tricks in order to conceal the performers physical deficiencies, but in Jet Li’s case we have a performer more than capable of long takes. As such, it is disappointing given the talent both in front of and behind the camera, that this is not a modern classic. All said, the action is still impressive, and deserves 4 stars, but the direction, annoying camera work and lack of real plot drag it down into the 3 star category.

There is no great way to own this film. The HK version has a terrible picture, and the Western releases are dubbed, although look much better. As a result, it is worth waiting – or hoping – for someone to give it the treatment it deserves. Unfortunately, Disney currently owns the rights, so the chances of that happening are pretty slim.