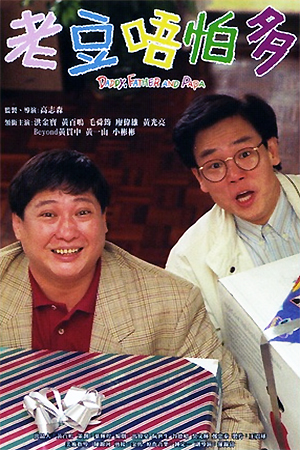 There are certain expectations that arise when Sammo Hung’s name appears on a cast list. Obviously his name is associated with top class action and exemplary choreography, but Sammo’s a good enough actor not to have to just rely on this. There’s also the comedic aspect of his cinematic contribution – few give Sammo enough credit for the quality of his comic timing and his strong eye for humour. Yet again, though, Sammo need not be fully focused on this as his screen presence means he is always magnetic whether the scene is humorous or serious. The bottom line is that Sammo Hung is one of the great stars of Hong Kong’s diverse film industry and just his appearance is the main reason to look forward to a production. Unfortunately, the fact that I admire Sammo so much may have been the greatest reason why ‘Daddy, Father And Papa’ is a major disappointment.

Benny is the underappreciated young son of a doting mother and an unpleasant, money-grabbing father. With such an environment around him, it’s only natural that Benny begins to feel that nobody loves him and that his father’s only real interest is in material success. After one particular argument with his parents, Benny runs away and stumbles upon a gangland murder involving a wanted photo-film. When he is spotted by the killers, Benny is kidnapped and told that, if he doesn’t reveal the location of the photo-film that accidentally fell into his possession, he will be killed. Meanwhile his mother is sick with worry about her son and, when she realises that the police will not help, hatches a sly plan to muster up support. She contacts two of her old boyfriends and tells each of them that Benny is their son and that his disappearance needs to be solved. Bull (Sammo) is more than willing to help when he thinks that his son has been kidnapped and sets out to find the culprits; joining Bull is the other ‘father’ (Raymond Wong) who helps and hinders in the quest to find the boy that both men think is their son.

However preposterous a film could be, a set of good characters can paper over some of the cracks and help claw back some entertainment value. Based on a French comedy, ‘Daddy, Father And Papa’ is full of plot holes that may have been forgiven if this were the case, but the unpleasant characters that populate the storyline only condemn it further. Benny, although the victim, is annoying, his mother (Mo) uses a very dubious idea to gain the help of others and the father is utterly contemptible. Of course, because this is another Clifton Ko family comedy, we’re meant to feel drawn to the characters by the end of the film; this simply doesn’t happen. The main highlight of ‘Daddy, Father And Papa’ is the underused, yet effective chemistry between Sammo Hung and Raymond Wong; it is their interplay that offers partial redemption for the film. Sadly, even though the film boasts popular villains like Tommy Wong and James Tien, Sammo Hung doesn’t get a single minute to show off his choreography skills. This is one of ‘Daddy, Father And Papa’s major flaws. Clifton Ko prefers to fill the film with dubious comedy and ‘Home Alone’-style action – certainly no compensation for even a few seconds of Sammo’s genius. What may have been an enjoyable action comedy is barely worthy of being called a comedy.