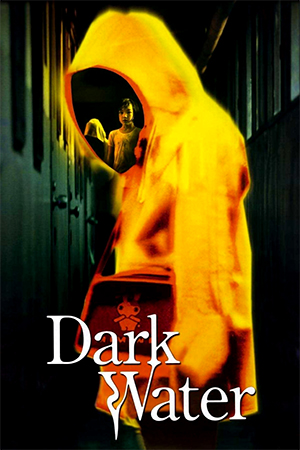 Although it wasn’t his first film, director Hideo Nakata will probably always be best remembered for 1998’s big screen adaptation of author Koji Suzuki’s ‘Ring’ (AKA ‘Ringu’). Four years later Nakata once again chose to dip into the works of Suzuki to adapt a short story taken from the book ‘Dark Water’. However, was lightning really capable of striking twice or did ‘Dark Water’ leave Nakata all washed up?

After Yoshimi’s marriage breaks down, her main priority is to ensure that she is granted full custody of their 6-year-old daughter Ikuko. With the courts and her stubborn ex-husband constantly looking over her shoulder, Yoshimi realises that she must re-establish a degree of stability in their lives by securing a new job and place to live. Unfortunately though, her choice of accommodation is rather limited and the couple are forced to settle for an apartment in a gloomy, run down block of flats. Once there, the discovery of a school bag left by a mysterious young girl, along with the appearance of damp patches on the ceiling and walls, starts a series of sinister events that will change their lives forever…

While the story unsurprisingly shares certain traits with the aforementioned ‘Ring’, ‘Dark Water’ stands out on its own as a very compelling entry into the J-horror genre that is as much about character development as it is about delivering the required chills and thrills. Hideo Nakata chooses to employ a slightly more sedate approach than you would usually expect in a horror movie, essentially using the first hour to build the tension and offer an insight into the life of its central character. During this time he competently explores the relationship between a mother and daughter, while making clever use of atmospheric locales and cunning camera angles to hint towards the supernatural entity that is pushing its way into their lives. It’s this human component mixed with such strongly constructed imagery that really gives ‘Dark Water’ such a frightening edge, and keeps the audience on the edge of their seat throughout.

Considering the characters of Yoshimi and Ikuko have a lot more to do than just run around and scream, the presence of a strong cast is absolutely essential to ‘Dark Water’. Thankfully, Nakata also seems to be aware of this and his choice of leading lady is second to none. Although I’ve never really encountered Hitomi Kuroki before, she seems to slot perfectly into the main role and her portrayal of the distraught mother is nothing short of superb. Much like Nanako Matsushima in ‘Ring’, she really has to carry the film alone and still somehow manages to find just the right balance between fear and believability without slipping into the standard horror movie clichés. Kuroki is not alone though as a certain amount of credit must also go to the young Rio Kanno, who, particularly in the closing sequence, displays more emotion than I think I’ve ever seen in a child actor and is shockingly a kid that remains cute while still being able to act.

Like the majority of Hideo Nakata’s work, ‘Dark Water’ proves to be more of a psychological entry into the genre rather than an all out gore-fest. While this means that those of you looking for cheap thrills may bemoan the lack of bloodshed, it’s the films amazing use of atmosphere and tension that make this a truly scary outing that is likely to leave a far more lasting impression than a handful of decapitations or bloody murders.