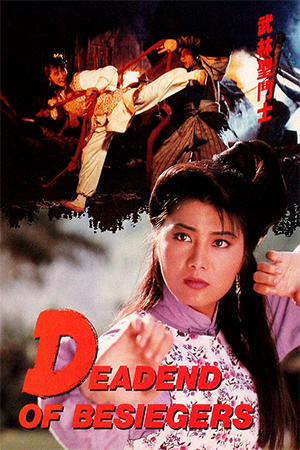 In the early 90’s following the massive success of Tsui Harks’s ‘Once Upon a time in China’, the face of Hong Kong action cinema changed drastically. Suddenly, every action movie was a period piece featuring feats of superhuman ability thanks to innovative wirework and deceptive camera techniques. This “new wave” of action highlighted the ingenuity and imagination of action directors like Ching Siu-Tung, Yuen Woo-Ping and Corey Yuen Kwai amongst others and put the West to shame when it came to the pure adrenaline displayed on screen.

One such new wave period piece, which has largely gone unnoticed amongst many inferior examples, is the Cheng Sui Wai directed ‘Deadend of Besiegers’ featuring the high-kicking talents of Yu Rong Guang and the illuminous Cynthia Khan. Neither leads ever managed to leap onto HK’s A-list during the early 90s, and were often in the shadows of more popular icons such as Jet Li or Michelle Yeoh. However, both Yu and Khan have the looks and the talent to carry this style of film, and it is a shame that they were often overlooked. Khan’s style is very similar to Michelle Yeoh (whose original surname she famously adopted) thanks to her intensive dance training affording her the timing and flexibility necessary to look fluid on screen. Previously she had looked her best working with Donnie Yen and Yuen Woo Ping on the high octane 80’s classic ‘In the Line Of Duty 4’, and in the mid 90’s she impressed in a supporting role in the excellent Sammo Hung directed ‘Blade of Fury’. Yu on the other hand was hugely impressive in Woo Ping’s ‘Iron Monkey’ (now getting a new lease of life in the U.S) and Corey Yuen’s ‘My Father is a Hero’ opposite Jet Li. More recently he could be seen as an Imperial Guard duelling Jackie Chan in the finale of ‘Shanghai Noon’.

‘Deadend of Besiegers’, filmed in 1992, sees Yu as a Japanese warrior (named Wuwechimatao) shamed in defeat by a Western Boxer. After being so humiliated, he chooses to commit Hari Kiri (noble suicide) but is stopped in the nick of time by a travelling Buddhist Monk who convinces him to seek enlightenment by learning Chinese Martial Arts. On his journey to China, Wu gets on the wrong boat and upon arrival is mistaken for a Japanese pirate. After escaping from both the pirates and the Chinese, he finds solace in the hills, secretly learning Shaolin kung fu from watching Monks and the “Dog’s fist” style from Michelle. In his constant battle to avoid anyone who wants to kill him, which is virtually anyone, he predictably saves the day and becomes a hero.

The plot may be nothing entirely fresh, but what separates this from any number of other new wave period flicks is the style of the action. Numerous fighting styles are faithfully portrayed from Japanese sword techniques to Chinese Wu Shu, and the numerous clashes are always interesting as a result. Not having a Woo Ping or Yuen Kwai on hand to style the fight scenes, Rong Guang himself took charge of the action, and on a clearly tight budget shows himself to be just as capable. Helped in no small part by a plethora of talented martial artists, many of whom you may recognise from Jet Li’s ‘Shaolin Temple’ series, the action sequences are well paced and tightly edited. Much of the choreography is not particularly intricate but makes good use of the cast’s talents. Yu in particular gets a chance to show off his impressive kicking repertoire, proving himself to be one of the top bootmasters in the business, a talent he is often given little credit for, and every scene features mass destruction as walls are broken and buildings are set on fire.

Not up to the standards of ‘OUATIC’ or ‘Fong Sai Yuk’, however, ‘Deadend of Besiegers’ is 90 minutes of excellent entertainment featuring some brilliant wireworked fights and a rare chance to see Yu Rong Guang carry a film and play a hero. He is an extremely talented actor and performer who has not been given enough chances to shine or the credit he deserves.