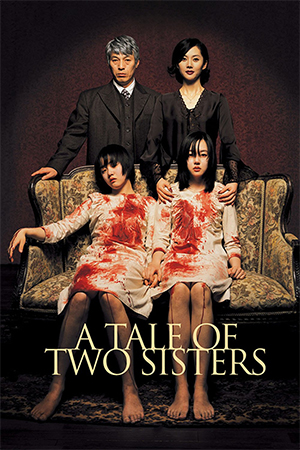 In 2003 South Korean director Kim Jee-Woon delivered one of the greatest examples of Asian Horror with his slightly re-told version of the 200-year-old folk tale, Jangwha-Hongryeon (literally, Rose and Lotus). While gore fans and those looking for ‘actual’ demons (rather than metaphorical ones) may be left out in the cold, ‘A Tale Of Two Sisters’ must surely rank as one of the best written, directed, acted and most unnerving psychological thrillers’ ever made.

Su-Mi (Lim Soo-Jeong: ‘Sad Movie’,’ …ing’) is returning home from an un-explained stay in hospital with her younger sister Su-Yeon (Moon Geun-Yeong: ‘My Little Bride’, ‘Innocent Steps’). Arriving at the house, they first explore the beautiful garden and journey down to the small, nearby peer to dip their toes into the lake. Neither girl appears to be in a rush to enter the house. Finally they are called by their father and hesitantly, they make their way inside. There, a woman, their stepmother to be precise, greets them. We can tell instantly that all is not right. After a bitter argument with the woman, Su-Mi leaves the dinner table to head for her dark, lonely room. Slight goading and a shade of spite from the stepmother leaves younger sister Su-Yeon following suite. The sisters’ father seems oblivious to all this however, and remains sat at the dinning table like nothing had happened. Later that night, ghostly noises can be heard throughout the creaky hallways of the house, scaring the younger sister into her elder siblings bed. But as Su-Yeon sleeps, a ghostly apparition appears before Su-Mi, climbing onto her bed and reaching down to strangle her. Both sisters are awakened by their father knocking at the door the next morning, only to find that they are safe and well, but the bed sheet is stained with blood. Su-Yeon had had her first period, and the girls are shocked to find that both they and their stepmother, all started on the same morning. What connection can this have to the eerie goings on in the house? Did Su-Mi really see what she thought she had that night? And why does the father seem to neither react nor respond, to any of this?

The questions posed all lead to answers that are probably best left buried. Tension mounts in the house as the two sisters try to unravel just what is going on, avoiding their evil stepmother as they go. If all this sounds anything like a fairytale, be prepared for a not so ‘happy’ ending. ‘ATOTS’ is a horror movie with a Difference. Yes, it does shock and scare the viewer, but it does something else that you’ll likely not expect: it also touches you. Underneath the horror is a story of a broken family whose members are at war with not only each other, but also themselves. Their tale is a delicate puzzle, which is mysteriously pieced together by the audience under the guidance of master director Kim Jee-Woon. For every time you jump, something will happen which will make you question the intention of all involved and, while the shocks are woven skilfully amongst the narrative, less patient viewers may be left itching for blood, guts and that creepy looking girl with the long black hair. I only hope that those people do find the merit in a different type of horror picture. In fact, as stated earlier, ‘ATOTS’ is more of a psychological thriller than straight out spook-fest. This is a film, which not only leaves you sweaty-palmed but also broken hearted at the pain and suffering of this once happy family. Personally, this for me leaves it running rings around, well, ‘Ring’.

Another area where ‘ATOTS’ stands head and shoulders above many other recent Asian horror films is in its design. The house itself is a beautifully constructed set, which has been designed and lit with remarkable detail. It almost takes on a life of it’s own in it’s brooding shades of purples and greens. Each area has been lit differently and so each room has it’s own characteristics which are perfectly exploited by the wonderful cinematography. Many unique camera tricks and special effects are also used, though you’d be hard pushed to tell. These aren’t effects which are used to create ‘otherworldly’ sights, but rather to give the camera better movement and heighten pivotal moments. A moving pattern on an eerie piece of wallpaper is one such example, as is what is probably the most important revelation of the picture towards the end. It’s a 360% camera movement in a confined space, which reveals the perpetrator of many of the wicked events, something that could have not been done if not for special effects. The music also follows the standard of these elements with a score which is both haunting and sad, but is never over used or simply ‘abruptly increased’ to scare the audience.

A film like this, where so much relies on character and interaction, lives or dies by its cast. Though not a large one (there are four main cast and only two other cameos) the cast of actors here are simply superb. Both sisters are very different in nature and though very young, come across strongly. 16-year-old actress Moon Geun-Yeong portrays the gentle Su-Yeon, perfectly capturing the essence of a helpless girl who is a pawn in the power struggle between her elder sibling and their evil stepmother. Lim Soo-Jung, who was also brilliant as the young girl with a terminal illness in ‘…ing’, shines through with a performance showing skill beyond her years. She perfectly portrays the struggle of juggling her vendetta against the step-mom with wanting to care for and protect her sister. As the stepmother, Yum Jung-Ah is a wonder to behold, acting above her age and giving a suitably chilling performance of a woman who seems cold, vicious and manipulative one moment but rather helpless and fragile the next. She manages so much with the little screen time she has and is surely an actress we will see much more of in the future.

Kim Jee-Woon brings all the various elements together into an intelligent, thought provoking whole. At it’s heart it is a story of a girl who was too petty minded to think of anything but her own silly grudge, and a family torn apart by the pain of change. Child abuse, suicide and mental illness are the real demons here and while that may put true horror fans off, ‘ATOTS’ more than makes up for lack of otherworldly goings on in beauty, intensity and a real sense of fear. If you are willing to substitute blood for brains and real heart for cheap scares, this movie will be one you will remember long after you see it.