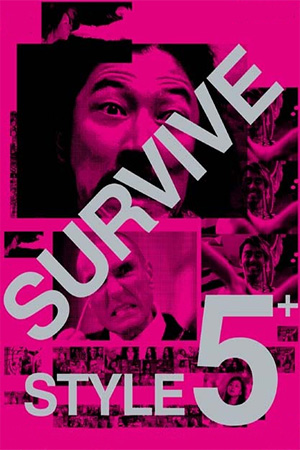 It’s hard enough to sum up any movie in a single paragraph but with a film like ‘Survive Style 5+’, it’s practically impossible. It’s a movie that defies expectations, has no set genre and at times, no real logic. Boundaries and limits are set aside but if you can just accept it on it’s own terms then it’s full of wit, charm, wonderful performances and plenty of style.

Tadanobu Asano (‘Ichi the Killer’/’Zatoichi’) leads a uniformly excellent cast as the lonely Ishigaki, a man trapped in a seemingly fruitless cycle of murdering his wife. Each night he kills her and buries her in the woods nearby, only to drive home and find her alive and well again, albeit slightly miffed. It is this story, which takes centre stage amongst a myriad of seemingly unconnected tales. In another, a gang of thieves drive around in a camper van robbing rich peoples homes. At least they would if they weren’t so embarrassingly dumb. The eldest of the three guys, Morishita, also seems to have a crush on his best mate Jai, but finds himself unable to admit it. The third story concerns Yoko, a commercial planner who seems oblivious to the pointless and absurd nature of her own ideas. In her head they work, but she’s not quite normal. Undeterred by the jeers of her boyfriend and peers, Yoko decides to take her latest idea to the head of a pharmaceutical company played by Sonny Chiba. Lastly we follow ageing businessman Kobayashi, who takes his wife and two young children to a hypnotists show one evening, only to find himself transformed – irreversibly – into a human bird.

If you are confused at this point, pity. That was the simple part. At first only one thing seems to connect all these disparate elements. Vinnie Jones, or at least the Hit-Man character he plays, turns up in each characters life to ask various people “What’s your function in life?”, he then dishes out what I assume is his trademark violence. At first it does not seem to have much meaning but the question develops a far greater importance as the film progresses. In ‘Survive Style 5+’ we are treated to a little bit of everything. Comedy, murder, horror, action, mystery, a little Kung fu, Gay romance, an ageing Japanese man doing a perfect impression of a human bird for two hours and likely, the best film ending you will ever see. Whether you’ll find sense in it all is another matter but even if you don’t the film is a joy to look at. ‘SS5+’ is photographed in such a way that colours literally leap from the screen. Costumes and sets are coordinated brilliantly and attention is paid to every detail in something similar to what Zhang Yimou did in 2003’s ‘Hero’.

Given the madness this film exudes the entire cast is admirably game. With Tadanobu Asano’s moody and intense Ishigaki shining brightest. He has very few lines but brings both gravitas and much needed humour to the screen in the darker moments. A cameo from Sinichi Chiba will likely please fans of ‘Kill Bill’ and worryingly, Vinnie Jones’ Hit-Man doesn’t seem that out of place amongst the carnage. He gets most of the best lines too, even if they are littered with expletives. Jai West plays his closet gay surfer dude with humour and Reika Hashimoto gets to look pretty and wear the most beautifully designed outfits I’ve ever seen as the repeatedly murdered Mimi. There are many, many memorable characters in ‘SS5+’.

Will Ichigaki ever be able to kill the mysterious Mimi for good? Will Yoko’s bizarre commercial ideas ever please anyone but herself? Will Jai realise he’s gay before the Hit-Man kills his potential lover? Is Kobayashi destined to be a bird-dad forever? More importantly, will you ever be the same again after watching this bizarre, beautiful, and quirky but very violent film? The likely answer is no! The writer and director have managed to create something unique with ‘SS5+’. Dazzling imagery, fun performances and a clever script mean it’ll be a cult classic with many people. Importantly, it also has heart and a message, which is swiftly and shockingly conveyed in the aforementioned ‘Best Ending Ever’. If you just remember to bring a sense of humour, and wonder, you’ll be rewarded with what is easily one of the best Japanese films of the year.