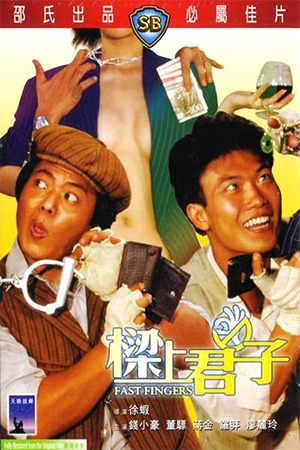 After his release from prison, Uncle Bill (Bill Tung) – notorious pickpocket – re-teams with his two adopted sons (Chin Siu Ho and Chiang Kam) and returns to his home town to make a fortune. The three amateur con-artists continue to prey upon the unsuspecting public, but are closely watched by the local police captain (Meng) who is keen to clean up the town. Unfortunately the captain’s principles are compromised when he discovers that Uncle Bill is the errant father of his beloved sweetheart, a fact that puts his crusade on temporary hold. The would-be hero is also distracted by a big case that involves a local drug dealer (Wang Lung-Wei) attempting to take over the city, though it proves to be ironic when he needs to call on the help of Uncle Bill’s gang to assist his mission.

The monumental success of Jackie Chan’s ‘Project A’ and Sammo Hung’s ‘Winners And Sinners’ had a clear influence on the action genre within Hong Kong. The ripples created by these two minor revolutions are clearly evident in Hsu Hsia’s ‘Fast Fingers’, a film that borrows heavily from the visual ambience of the former and the quick-fire choreography of the latter. The more traditional style of Hsia’s 1981 effort ‘Lion vs. Lion’ is replaced by the progressive modernity that Jackie and Sammo changed Hong Kong action cinema with. Importantly, though, Hsu Hsia is not a helmer who stands shoulder-to-shoulder with the aforementioned genre legends, a fact that the 90-odd minutes of ‘Fast Fingers’ fully re-iterates.

‘Fast Fingers’ starts promisingly. The concept behind the opening ten minutes recalls the ebullient energy of 80s Hong Kong action comedies, throwing diverse characters into unusual situations together. The said performers are also able enough to carry the storyline for the opening portion of the film while the viewer waits for the main body of the narrative to click into gear. This transitional moment is sadly absent, though, and the whole production turns into an extended sit-com albeit stretched over twice the usual duration. Though the conflict between the captain and Uncle Bill promises a battle of wits and the introduction of a more sinister villain should give the film an edge, these elements are discarded by a careless director.

The use of comedy in the genre has produced some masterpieces worthy of wider attention, but it has also been wildly overused by film-makers who have little idea how to balance the components they are working with. While ‘Fast Fingers’ fails to appreciate how important a plot is as opposed to a series of skits, perhaps the most frustrating part of the production is the fact that there are some very good moments and many more promising ones. The early comic routines blend into the overall atmosphere of the film, but then Hsu revels in the excess of such moments, even wasting a significant portion of the film with an uninteresting scene in a nightclub that seems to drag on forever. To put us through this, then offer up a sublime fight in a hospital a mere ten minutes or so later leaves us not knowing where to look.

Enough of the disappointments, what of the strengths? First and foremost are the moments when Hsu Hsia the choreographer comes out of the shadow of his inferior alter-ego and ignites the screen with a few excellent confrontations. The previously mentioned fight scene between Chin Siu Ho and a would be assassin in a hospital is easily the best of these, combining superb acrobatics with masterful innovation. What makes this scene especially memorable is that the soundtrack is a Chinese hymn sung by a group of well-wishing nuns – a stark contrast to the rest of the score which sounds like something lifted from ‘On The Buses’. Hsu Hsia also groups together a fine cast with Chin Siu Ho relishing his chance to be the mischievous hero and Lo Meng content to play the straight man to his antics. The chemistry between them – not to mention Bill Tung – drags the film through the predominantly inane and wasteful mid-section.

While ‘Fast Fingers’ may be seen as a combination of kung-fu and comedy, it is more memorable for being an amalgam of the sublime and the ridiculous. There are moments of pure 80s magic here, but they are sadly swamped by the desperate mugging and extended comic routines. Such lacklustre attempts to capture the Golden Harvest vibe probably hastened the demise of Shaw Brothers as a movie-making empire. ‘Fast Fingers’ is recommended for its few sequences of inspiration, but you may need the fast-forward button close at hand.