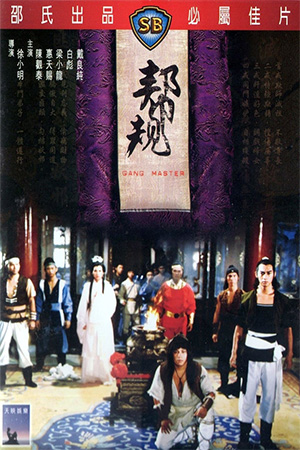 When the leader of the patriotic Dragon Gang, charged with forcing the Mongol rulers out of China, dies, his place as leader is taken by his adopted son Zhong (Austin Wai) who gladly accepts. At the ceremony, however, it is revealed that Zhong’s real family are Mongols and he is therefore ineligible to take the position. Worse than that is to come though, as Zhong is banished from the clan and accused of helping the Mongols quell the uprising. With a price on his head and unable to trust anyone around him, Zhong tries to uncover the truth behind his heritage and find out why someone within the clans is so keen to get rid of him.

‘Gang Master’ is probably best described as a Shaw Brothers B-grade movie. That sounds unkind, but it isn’t intended to be. The fact is that this later Shaw Brothers film doesn’t have the star power of many of its contemporaries and appears to have been another vehicle to make Austin Wai the next big thing. That doesn’t mean it is not entertaining though; with a cast of familiar Shaw Brothers company players and Tsui Siu-Ming behind the lens, this was never going to be a waste of time. Yet there is the feeling that ‘Gang Master’ could have been so much more, never properly igniting the way way you hope it might.

The main story starts briskly with Zhong being thrown out of the clan, though it never capitalises on the tension of the ‘Man On The Run’ narrative that makes up most of the film. Austin Wai is a decent lead though whether he had the acting chops to take centre stage is open to debate; no-one can doubt his physical abilities and he impresses in the various fight sequences. Despite this, ‘Gang Master’ suffers from a degree of monotony in the later fight scenes, something that, with Yuen Cheung-Yan in charge of choreography, you really do not expect. The one stand-out – and it is especially memorable – is the fight scene between Wai and the toothy, axe-wielding carpenter that concludes with the latter lying unconscious in a impromptu coffin. It really is one of the great forgotten fight scenes of the later Shaw Brothers era.

‘Gang Master’ feels like a series of missed opportunities woven together though. The twists are expected and add little excitement to the film while the pace slows down in the middle where time is filled with lesser fight scenes and intrigue. Bruce Leung is also criminally wasted – someone of his ability should really be given a much greater chance to show it – while Tsui Siu-Ming never quite lets the film get out of second gear. It’s not that it isn’t enjoyable – there is plenty to savour here – but considering the talent available on both sides of the lens, it is mildly frustrating.