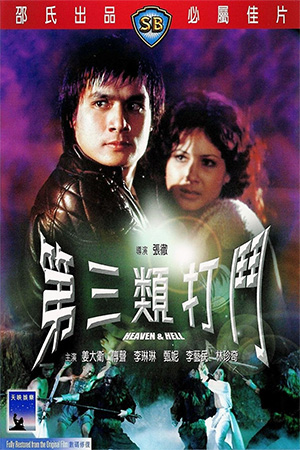 As punishment for allowing love-struck deities Zhou Bao (David Chiang) and Zi Xiao (Maggie Li) to elope and escape to the mortal world, Chief Guard Xin Ling (Li Yi Min) is banished himself from Heaven by the Jade Emperor. Once on Earth, Xin Lung is reincarnated as a simple taxi-driver but his kind-hearted nature sees him come to aid of another couple. Chen Ding (Alexander Fu Sheng) and Shi Qi (Jenny Tseng) are doting teens, whose only obstacle to happiness is drug-lord Mr. Huo (Chiang Tao) who wants Shi Qi for himself. It is Xin Lung’s cab that the couple flee in when a carload of thugs stops them, and in the ensuing fight misfortune strikes when Xin Lung himself is shot dead defending them. His murdered soul has nowhere to go but straight to Hell.

Once in the underworld, Xin Lung meets a young woman, Hung Chin* (Lin Chen Chi), whose life ended on Earth when she was intoxicated, drugged and fell to her death. The two elect to skip judgement in the Palace of Hell but are soon separated and Xin Lung finds himself condemned to the Gambling Hell by the Judge of Hell (Cheng Miu) himself. Swiftly making his escape the two are soon reunited, falling in with a gang of bandits before being estranged again. Xin Lung is sentenced to the Plough Hell, while Chin is snatched by Hell’s brothel madam Yen (Ha Ping). But just when things look hopeless, whispers arise amongst the City of Lost Souls that the Buddha of Mercy (Yue Wing) is due for his annual pilgrimage and his reward is reincarnation for the most worthy souls.

Often cited as one of Chang Cheh’s worst films by (blinkered) martial arts aficionados, ‘Heaven and Hell’ (1979) is actually a whole lot more interesting, and engaging, than one would outwardly expect from its (largely) negative reputation.  However, the viewer should be warned that one’s mileage with the film directly correlates to their understanding of the Chinese concept of Hell (or Diyu) as well as a basic grasp of Buddhist theologies. Without a modicum of comprehension in these areas, Chang’s film will undoubtedly equate as a bizarre, psychedelic anthology piece with a narrative arc almost impenetrable to Western (in turn Christian-based) sensibilities. Whereas within the idiom of Christian “Fire & Brimstone” iconography Hell is an intangible plane where the souls of the wicked are cast to eternal damnation, Diyu/Chinese Hell offers an entirely different structure.

The basis of Chinese Hell is that the souls of those who have committed mortal sins are assigned various trials, tortures and tests until they have atoned for their worldly wrongs and are judged redeemed, allowing for the soul to make passage to reincarnation. Additionally, though traditional Buddhist texts describe 134 levels to Hell, from the Tang Dynasty forwards Hell is comprised of eighteen levels (of suffering) and within the evolution of his plotline Chang explores (and makes explicit) many of signature tortures of these ideologies. For many drawn to the film from a more rudimentary martial arts directive, much of this will seem alien if not completely bewildering and will undoubtedly hinder an appreciation of the work as a whole.

Outside these precepts the film itself suffered from a troubled production history. Commenced in 1975 under the shooting title ‘The Hell’ funding quickly dried up and the project was shelved. When shooting resumed in 1977, principle cast David Chiang, Maggie Li and Shih Szu (whose Shaw contract had expired) were no longer available and Chang drafted in a good portion of his ‘Chinatown Kid’ (1977) players. The film was eventually completed in 1979 with Chang’s favoured “Venom Mob” filling out surrounding footage of previously shot (now) lead, Li Yi Min, and finally released early in 1980. With such a stop-start production, one might expect an editor’s nightmare yet the resultant film works extremely well as a collective ensemble, echoing many similar omnibus pieces created by Li Han Hsiang during his tenure with the Shaws and works through its stages seamlessly. Most surprising, for those coming to the film expecting an Alexander Fu Sheng vehicle, is that star-billed Fu Sheng and (wife) Jenny Tseng, engage less than fifteen minutes of screen-time (in the piece’s second segment) and it is lesser billed Li Yi Min who is actually the film’s principle star and connecting character. In this instance, that’s not necessarily a bad thing as Li comes across the perfect “everyman” for the occasion and exudes enough personal charisma to carry the piece with aplomb.

Once the film settles into its final act, where the Buddha of Mercy grants safe passage from Hell on the proviso that Xin Ling locates four wronged souls whose help he count on to fight their way out of the underworld, Chang’s much-beloved Venom Mob make their appearance as well are afforded their own (brief) back stories. Lo Meng is a street youth (!) who was shot dead by a gangster, Phillip Kwok a soldier killed by a corrupt official, Bruce Tong wronged and tortured by similar corruption and Sun Chien the victim of a robbery gone bad (look out for Kara Hui in a cameo). Once they’re all located, the remainder of the film more or less descends into one long martial arts brawl between Li and his team and a legion of Hell Guards, who just happen to be the spiritual forms of their mortal enemies. Naturally, that’s the point where the triumvirate of action choreographers (Chu Lu Feng, Robert Tai and Leung Ting) come into play, and though things do draw out to near-tedium levels they are at least somewhat alleviated by the garish sets, bevy of monsters and overall colour-clad aesthetic.

However, endless displays of carefully staged kung fu aside, the real place ‘Heaven and Hell’ excels in its depiction of Hell itself. Be it the originating “Inferno” component of Dante Alighieri’s Divine Comedy poem through Nobuo Nakagawa’s ‘Jigoku’ (1960) to less serious fare such as ‘Bill and Ted’s Bogus Journey’ (1991) and contemporary visual effects extravaganzas like ‘Constantine’ (2005), the physical depiction of Hell has seemingly always fascinated filmmakers. Chang gives his viewer literally as many of the various levels of Diyu as the film’s budget could muster, from the frozen ice world to gruesome tortures including skinning, boiling, dismemberment, hanging and so on. The varied horrors and tortures of Hell are fully realised, often in such a continual parade that their display becomes almost comical in its excess. The fact that souls in Chang’s vision of Hell don’t spill blood, but rather a colourful array of fluids and viscera, does little to lessen the impact of the sheer magnitude of horrors on show. Gamblers begging passersby to chop off their fingers so as not to be condemned to gambling for eternity are just the tip of the iceberg, or many torture chambers as it would be.

Much maligned and often ridiculed amongst the fan-base of the kung fu community as one of Chang Cheh’s lesser works ‘Heaven and Hell’ is not nearly as bad as it has been painted since its release, especially once one takes into consideration that the sideshow of graphic horrors and hour long descent into the Hell of its title more firmly leans it towards a product of the horror genre. The eclectic additions of ‘West Side Story’ (1961) styled musical numbers, romantic interludes, gallows humour, lengthy martial arts bouts, and macho heroes wearing glitter, eyeliner and disco suits only adds to the overall surrealistic manic excess of it all. At some junctures it’s almost as if Chang were channelling Chilean filmmaker Alejandro Jodorowsky by way of Roger Corman’s ‘The Trip’ (1967). Apart from the almost absurd ‘Five Element Ninjas’ (1982), ‘Heaven and Hell’ is perhaps one of the most unique and outrageous of all Chang’s myriad cinematic excursions throughout his career. Ripe for rediscovery and re-evaluation (from a genre-specific perspective) it is a marginally flawed, somewhat infrequently erratic, but wholly engaging journey into Chinese beliefs and superstition that can be appreciated as more than just a martial arts film with genre overtones. Definitely well worth a second look.

Footnote (*): Lin Chen Chi’s character name is, in the film’s Mandarin dialogue, referred as “Hung Chin” which can be alternately translated as “red dress” or “red skirt”. The film’s English subtitles refer to her as “Red Dress”, which is a near literal translation of her name. For the purposes of this review I have elected to retain her character’s name by its Mandarin variant of “Hung Chin”.