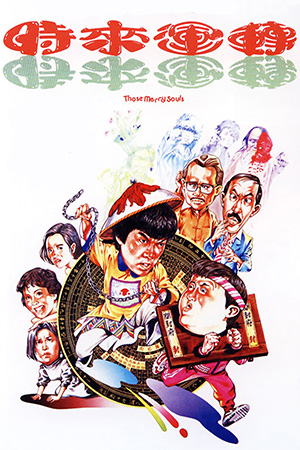 Chi-Lung (Biao) and Kuai-Tak (Tsang) are two stuntmen who are light years apart in talent but couldn’t be closer in the friendship department.  As they go about their happy-go-lucky lives, they are completely oblivious to the eerie reality that Chi-Lung’s father is in fact a messenger of death – a role passed down through generations where one must guide the souls of the recently departed to the afterlife.  This wouldn’t be a big deal if it didn’t turn out that his next victim was to be Kuai-Tak, forcing him to choose between taking the life of his son’s best friend or doing his devilish duty.  Of course, being a good father he is unable to bring misery to Chi-Lung’s life and chooses to bypass his duty and allow Kuai-Tak to live on.  A bad move on his part though, as spirits make the worst enemies and as Kuai-Tak continues his existence, he is completely unaware of the terrors that not only await Chi-Lung’s father but also Chi-Lung.

‘Those Merry Souls’ is another typically quirky 80’s Hong Kong movie that falls firmly into the category of “strange but immensely fun”. The story certainly dishes up an unusual concoction, cramming in everything from a love story to tales of the walking dead. Somehow though, this unconventional blend of genres seems to work as the film finds the right balance between infectious humour and ghostly goings on.  Yuen Biao is also a major plus as he makes for a typically likeable leading man and he has solid backup in the form of Eric Tsang. Of course, this being a Hong Kong flick you have to have at least a little action and there are a couple of fight scenes included. While they are far from the finest that Biao has participated in, they do still make for a fun little footnote that adds to the film’s overall charm.

‘Those Merry Souls’ has a strong cast, some genuinely funny moments, and a bizarrely entertaining plot. It perhaps isn’t quite good enough to reach classic status, but it does more than enough to warrant a solid recommendation.