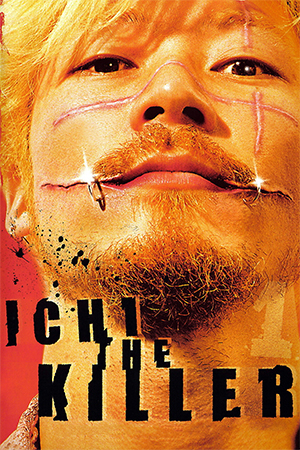 Takashi Miike’s ‘Ichi the Killer’ has become a by-word for cinematic atrocity and the zenith of screen depravity.  As gleefully vile as Hideo Yamamoto’s source manga, it continues Miike’s fascination with bizarre love affairs and violent consequences previously seen in ‘Dead or Alive’ and ‘Audition’.  Both those movies drew criticism for the graphic imagery, but nothing prepares an audience for the unrelenting onslaught of ‘Ichi the Killer’.

Look past the carnage however and there is a well-crafted tale of the weirdest characters never to appear in a David Lynch movie, centred on the bizarre love story of a twisted yakuza Kakihara (Asano) and his quest for that special someone who can provide the pinnacle of pain.

The basic story is simple, expertly distilled by Sakichi Sato from Yamamoto’s multi-volume manga.  Ichi (Omori) murders a yakuza boss, on the orders of the mysterious Jiji (Tsukamoto).  Kakihara refuses to believe his boss is dead, and is mislead by Jiji into torturing a rival yakuza.  Expelled from the syndicate for his conduct, Kakihara begins his journey for Anjo’s killer, partly for revenge but also to savour in person the pain and fear Ichi is bringing down on his gang.

Joining Ichi and Kakihara for the ride are Karen (Sun), Kakihara’s unhinged squeeze and Kaneko (Sabu), a down on his luck ex-cop turned yakuza bodyguard, plus a memorable rogues’ gallery of pimps, gangsters and other lowlifes.

Although the carnage and nihilism can be overwhelming, ‘Ichi the Killer’ is not merely the work of shock amateurs.  Visually, the film is handsomely shot by regular Miike DP Hideo Yamamoto (not the manga’s author), with Shinjuku, Tokyo’s notorious neon-drenched red light district, turned into a level of Dante’s Inferno.  Miike frequently employs surveillance cameras and video to give the images a voyeuristic quality, and he realizes the possibilities of CGI far better than most of his Western contemporaries.

Although the story is straightforward, Miike drops the audience directly into a fully formed yakuza world with little introduction, denying them a single sympathetic main character, and subverting expectations.  Ichi is ostensibly a superhero, fighting “bullies” with a preternatural strength and a cool black outfit with a yellow “1” emblazoned on the back, but he is also under the mind-control of Jiji and fuelled by his excitement of a rape he witnessed in high school.

In the opening minutes Ichi spies on the vicious assault of Sailor, his favourite prostitute, but rather than rescuing her he leaves a deposit of semen that morphs into the film’s title.  Even Kaneko, whose hard-luck story makes him a typical underdog, loses the audience by kicking a woman to death.

What prevents ‘Ichi the Killer’ from becoming a gruelling ‘Guinea Pig’ clone is a razor-sharp streak of black humour, and the unreal use of CGI.  To atone for his transgressions the sweet-toothed Kakihara slices off the end of his tongue in a toe-curling moment of hysterical excess, only to receive a call on his mobile.  Grim comic excess punctuates the film: the first display of Ichi’s power comes when he cuts Sailor’s pimp lengthways in two, Kakihara puffs cigarette smoke through two large cuts in his cheeks, he and Karen bond while ripping off a restaurant manager’s face, and a psychopathic police detective hunts down Longie, a member of Jiji’s gang, by tracking his girlfriend’s “scent”.

Yet, ‘Ichi the Killer’ is an apocalyptic movie with a pessimistic view of human relationships.  The one affectionate relationship, between Longie and his girlfriend, ends with her torture (including an infamous nipple slicing) for information on his whereabouts.  This violence against women drew a lot of flack (particularly from the BBFC who cut 3 minutes and fifteen seconds primarily for this reason) but the violence and rape is so grotesque that any censorship succeeds only in making it more palatable.  The sexual violence is presented as violence, not as titillation, but that it depicts the horror so convincingly may be what upset the BBFC who have little trouble with Hollywood’s more “agreeable” depictions of assault.

Asano as Kakihara and Omori as Ichi fully inhabit their roles.  Asano, bleached-blond and emaciated, differs from his dark-haired, muscular manga counterpart, but his bravura performance is reminiscent of Malcolm McDowell in ‘A Clockwork Orange’, dominating the screen with his lethal cockiness.  Omori goes to the opposite extreme, presenting Ichi as a tragic, manipulated child, making his actions all the more difficult to stomach.  These central players are but two fascinating characters, with supporting characters vividly brought to life by directors Tsukamoto (of ‘Tetsuo’ fame) and Sabu, and the Hong Kong actress Sun.

‘Ichi the Killer’ is a difficult film.  The graphic imagery can be hard to defend other than it is highly unlikely to deprave or corrupt, while the disparate plot-threads and enigmatic ending, which forgoes a conventional stand-off for surrealism, will baffle and bore many viewers.  But for those prepared for difficult material and subject matter it is a stylish, gripping example of fearless, maverick cinema.

Miike went onto the heartwarming ‘The Happiness of the Katakuris’ after ‘Ichi the Killer’, his “life” film to balance his “death” film.  That the same director can switch between moods so effortlessly and make five other films in the same year, including the astonishing ‘Visitor Q’, demonstrates Miike’s almost supernatural affinity with his chosen medium.