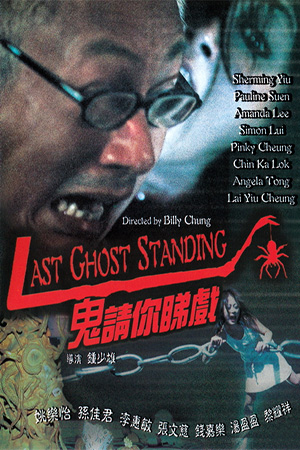 It’s the last night of the passing Millennium, December 31st, 1999, and Yeung (Simon Lui) has been saddled with his last shift as projectionist, albeit the very last session for the soon to be defunct Broadway Cinema. With rampant VCD piracy growing, and a dramatic downturn in attendances, the dilapidated old theatre has struck its last hours, administrators placing the establishment into liquidation. Settling in to his last evening of gainful employment with steadfast girlfriend Yiu Yiu (Sherming Yiu) by his side, Yeung wistfully laments his future fortunes and abilities to provide for his loving partner, frightfully ill-prepared for the run of surprises the old building will thrust upon him during the encroaching hours towards the stroke of midnight.

Somewhere within the depths of the creaking monstrosity lurks forces beyond the blissful couples’ comprehension, and they’re much more frightening than the manic grumblings of Yeung’s highly-strung manager, the slightly-more-than-edgy Cheung (Wayne Lai). Unbeknownst to all parties, a nosy administrator has unleashed freaky forces in the bowels of the building and before anyone realises what’s going on, something small, red, and rather toothy has eaten the candy bar girl (Amanda Lee). Yiu Yiu is visited upon in the empty stalls by a flamboyantly dressed stranger (Francis Ng) sporting a creepy taste in mascara, who may (or may not) be the Devil himself.

Questioning Yeung’s love for her, the stranger offers forth a test of Yeung’s heart, before transforming the doe eyed Yiu into a floating head. Beset by all manner for ghosts and demons, Yeung and Cheung are left little in response but to bounce out of their socks in justifiable horror. But the night has only just begun, and with the entrance of a trio of stoned party-goers (Karen Tong, Pinky Cheung & Benny Chan) plus the appearance of a policewoman (Pauline Suen) who answered Cheung’s call on her way to a rave, the Devil has more than enough party guests to have his brand of demented fun with as 2000 looms on the clock. But is the apocalypse upon all trapped within the theatre or, like the mortals that surround him, is Satan just having one last playful bash before a new era is ushered in?

Since their inception at the tail-end of nineties, independent Hong Kong production house Buddy Film Creative Workshop has turned out cost-effective, fiercely entertaining commercial productions at a rate of knots that would only ever be possible within the confines of the Hong Kong film industry. Sure, there have been a couple of misfires along the way (Marco Mak’s ‘The Replacement Suspect’ (2001), a slavish revisualising of Kevin Spacey’s ‘Albino Alligator’, being at the forefront), but by and large Buddy’s output has been slickly produced low budget fare that entertains more often than not. Unsurprisingly, ‘Last Ghost Standing’ nestles in comfortably amidst their more accessible productions, eschewing the mock-serious scares of their ‘Ring’ inspired peers (ala Tony Leung Hung Wah’s ‘A Wicked Ghost’ (1999) etc), coming over more as an affectionate homage (and throwback) to the region’s monumental comic-horror cinematic history. ‘Last Ghost Standing’ shares more in common with past hits of the variety of ‘Mr. Vampire’ (1985) and their ilk than any of the successive strait-laced horrorfests that would sully forth at the turn of the Millennium. In turn, this means that it’s largely a cheap, cheerful and cheesy affair, yet one that wears its cut-price heart on its sleeve.

Based upon a novel by former radio DJ, and regional horror specialist Simon Lui, ‘Last Ghost Standing’ knowingly plays upon its cinema setting, thumbing its nose at horror conventions as well as the very films that inspired much of its hilarity along the way. Whilst some viewers would perceive certain passages of the film as out and out plagiarism (with two sequences lifted virtually verbatim from Sam Raimi’s ‘Evil Dead II’, 1987), it becomes apparent early in the piece that this is exactly what co-writer Lui and director Chung intended, as all parties involved are clearly having a tremendous amount of fun at their subject matter’s expense. As noted above, although popular character actor Wayne Lai doesn’t harbour the savvy to pull off physical comedy the way Bruce Campbell did in Raimi’s film, it’s no small delight to see the “man against possessed body part” sequence recreated herein and transplanted to a distinctly Hong Kong motif. Lai’s manic intensity does, however, lend immeasurably to the sequence and its successive coda, providing yet another memorable moment in bent cinema for Lai to add to his resume (Lord knows how the man does it! His repertoire must be huge!). His pronouncement in character that he “is from the underworld! I cannot die!” brought welcome guffaws from this viewer (in itself a sly dig at the then burgeoning Goo Wat Jai sub-genre initiated by Andrew Lau’s ‘Young and Dangerous’, 1996).

Of the remainder, both those in front of and behind the camera are clearly running with the hyperactive script and having a grand old time in the process. Associate producer Sherming Yiu, an adorable little actress I have grown quite fond of over time, lends engaging empathy to her part almost solely through her ability to manipulate her comically large eyes to striking effect, playing out doe-eyed innocence on one hand and glowering malevolence on the other (yes, she makes for an effectively frightening severed head!). Screenwriter and lead Simon Lui, given over to more intense, disquieting characterisations of recent years, affords himself the chance to act the clown, goofing off as only Lui is capable of (His comic battle with Yiu’s severed head is worth the price of admission alone). Lui and Yiu work well together onscreen and, against a backdrop of enjoyably cheesy rubber monstrosities engineered (for what looks like pocket-change) by Sam Ho, give the viewer a strong heart to identify with amongst all the crazed, rapid-fire shenanigans. And let’s not neglect to mention Chin Kar Lok’s cameo, in a merciless piss-take of Jackie Chan that makes Wong Jing’s ‘High Risk’ (1995) seem rather restrained by comparison…

Back it all up with the usual low-brow humour we have all come to expect from Hong Kong comedy (a wacky denizen of hell composed entirely of faecal matter, fear-induced flatulence attracting the unwanted attention of a stalking monster, and an erection joke that comes way out of left field), as well as some impressively zippy visuals (Yiu suspended above the cinema stalls via chains directly from Hell doused in a tidal wave of blood comes to mind), and you’ve easily had a pretty manically enjoyable hour and half of fun. In 1999 I was quick to write this one of off as unmitigated trash of the lowest order, yet some years on (and with a completely different perspective) it’s now far easier to tap into its crazed energy, self-deprecating humour, and bottomless sense of self-parody. It’s certainly not a film that will rock anyone’s world, but as a throwback to a bygone era of Hong Kong horror it’s a refreshingly rewarding treat (albeit, one that has its fair share of gross-out gags). Well worth giving a whirl; only catching it in a creaky old cinema could make the experience any more enjoyable than it already is…