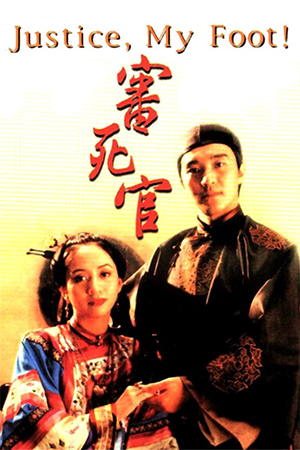 Hong Kong’s number one box-office draw, Chow Sing Chi, scored another major hit in 1992 with a period comedy that made just under HK$50million. If nothing else this proves that financial success does not a good film make; there’s no doubt that Chow himself has made far better and funnier films in his career. More about this very average production later.

Chow plays famous barrister Sung whose reputation as a fast-talker and slippery wordsmith are legendary. After taking a case that finally twinges his conscience and at the bequest of his wife (Mui), Sung decides to retire from the courtroom and concentrate on family life. His peace and quiet is not long lasting though as he is persuaded to take up the case of a wailing widow (Ng) who wants to prove that her brother-in-law murdered her husband. Unfortunately the odds are stacked against them when the accused throws money at the corrupt magistrate (Ng Man Tat) and persuades him to frame the justice seekers. Therefore Sung finds himself framed for contempt of court and possibly even the murder of his client’s husband, leading to his imprisonment by the enemy. The skilful barrister must now try to trick his way out of prison, clear his name and win the case in quick succession.

It maybe a good thing to first try and think about the positives that this film offers before concentrating on the numerous criticisms. Foremost among the plus points is the excellent chemistry between Chow Sing Chi and Anita Mui; as with his partnership with Carina Lau in ‘Forbidden City Cop’, the two performers have a wonderful spark as the married couple who squabble, yet deeply love each other. Seeing Chow play such roles is a pleasant sign of comic maturity and something that seems to be becoming more emphasised as time goes on. The film also boasts fine period detail that effectively draws the viewer into the opening of the picture. This leads nicely onto the many bad points that sadly litter this big-budget comedy. As was said, the opening gives the impression that this will be another enjoyable comic romp from Chow, but it soon fizzles out. By the halfway mark of ‘Justice, My Foot’, most of the interest has disintegrated and the viewer ends up sitting their hoping for something special to happen; the wait proves to be in vain. It says something for the comedy on display when director and star have to rely on cheap flatulence gags for desperate laughs; even the customary Cantonese patter that usually earns a baffled laugh from Western audiences is incomprehensible here. The impressive supporting cast are pretty much wasted as well, with Carrie Ng in particular cursed with a hopeless role that calls on her to cry and little else. ‘Justice My Foot’ is mediocre and recommended only to strong Chow fans.