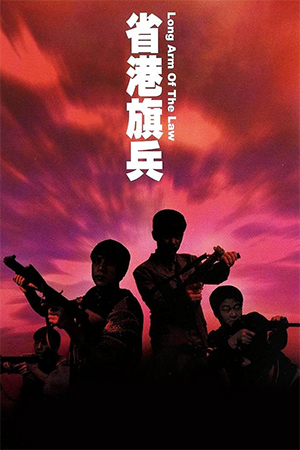 A group of ex-army mainlanders plan to go to Hong Kong to make a better future by pulling off a jewellery store. In the process of escaping from the mainland they lose one of their members to the security forces. After getting through the Hong Kong Check point by posing as a dragon dance troupe, they are stopped by the police while staking out the jewellery store they intend to rob. They are then forced to postpone the heist for three days as there was already a failed attempt by another gang of hopefuls. With no money they need the means to keep themselves in the meantime so they pull off a hit for $50,000. However unbeknownst to them the victim is actually a cop. On discovering this they go back to Tai, the local gang boss who they carried out the hit for, and unsubtly demand more money. Outraged, Tai ends up becoming stool pigeon to the police as a means of removing them.

A precursor to the ‘Heroic Bloodshed’ genre which began with John Woo’s ‘A Better Tomorrow’, ‘Long Arm of the Law’ is anything but stylised. Unlike most of the films from the aforementioned genre the violence is not romanticised. It is gritty and savage with an almost documentary approach to film making. Johnny Mak even cast unknown actors to emphasise this effect. Because of this characterisation is minimal and the audience is not invited to empathise with the lead protagonists. All the characters remain pretty unlikeable. Not even the police are portrayed as heroic. This does not mean however that it is not compelling viewing. Though we may not identify with the characters they still maintain the viewers interest.

‘Long Arm of the Law’ does have some technical flaws however. CCTV footage conveniently use the same camera angles as seen in the film, and rather than shooting the security cameras the protagonists shoot the security monitors instead. However if you can overlook these minor flaws you are left with an otherwise solid film. Regarded as a milestone and clearly influential, ‘Long Arm of the Law’ bears more than just a passing resemblance to Ringo Lam’s later seminal work ‘City on Fire’. But the final reel filmed in the infamous ‘Walled City’ is as they say, worth the price of admission alone. Tense and claustrophobic it is an exhilarating sequence.