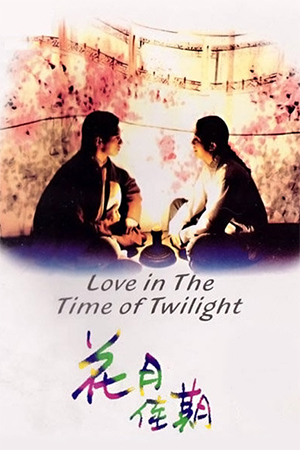 After noting the magnetic chemistry between Charlie Yeung and Nicky Wu in the tragi-comic hit ‘The Lovers’, Tsui Hark apparently paired them together again in this opportunity to capitalise on their success. ‘Love In The Time Of Twilight’ takes a different path to its predecessor; it’s certainly not an allusion to a classic work – in fact it probably has more in common with the ‘Back To The Future’ films. As zany as this sounds though, Tsui Hark is one of the few directors who, at their best, can conjure up something special from unlikely ingredients.

Despite their respective desire to meet a future partner, Yan (Yeung) and Kong (Wu) develop an animosity toward one another after a troubled meeting during ‘Affinity Day’. Yan returns to her life as a not-too-talented performer at her father’s opera troupe while Kong returns to his work as a bank clerk. The two clearly have no intention of meeting again until Kong is murdered and Yan is persuaded to go back in time to uncover the mystery behind it. At first Yan is reluctant, but participates to ease her conscience. However, after the first leap back proves unsuccessful and she witnesses Kong’s murder herself, Yan is deeply moved by the events and decides to go back again. Eventually it becomes evident that the only way the tragedy can be averted is if the two can turn their initial dislike into love before the dreaded moment comes.

‘Love In The Time Of Twilight’ is the kind of film that starts awkwardly but increases in stature as the story continues. Initially the production becomes saturated in pointless slapstick and the foolish antics of Eric Kot, whose edict is that a silly face or an annoying voice can entertain better than real charisma. It therefore seems as if Tsui has simply rushed out this re-teaming of Yeung and Wu without any thoughts of quality or entertainment. The first twenty minutes, though, do not represent the finished article and the patient viewer is undoubtedly rewarded for sticking with the film through its misguided opening.

When the first quarter has passed and the interplay between Yeung and Wu takes centres stage, the film finds its feet and confidently matures into a quality slice of entertainment. Obviously, after their excellent partnership in ‘The Lovers’, it’s not difficult to leave the two stars to their own devices and allow them to re-kindle their chemistry. Nonetheless, Tsui deserves credit for his continual refusal to go down the pedestrian route. Using ‘Back To The Future 2’ as a template may sound unwise for a story set in early 20th century China, but Tsui turns the idea into a workable one.

As I’ve stated before, using time travel as a plot thread is difficult to judge; you either film it seriously and try to explain away the odd paradox with conjecture or your make the pace so energetically hectic that the audience doesn’t have the opportunity to question moments in the story. The latter technique was successfully utilised by Robert Zemeckis in ‘Back To The Future’ and it’s also the chosen path of Tsui Hark. There are plot-holes (such as why Ying, the woman who tricks Kong, doesn’t get her comeuppance), but the inertia behind the story is so great that it’s impossible to worry about such things. The fact that Tsui re-visits the past more than once also peppers things up considerably.

‘Love In The Time Of Twilight’ finishes so well that it is difficult to remember how frustrating the first section was. However it’s still these pointless moments that end up degrading the final effect of the film. Thankfully Charlie Yeung is wonderful as Yan – charming and totally engrossing – while Nicky Wu is a perfect foil as the more serious Kong; these two superb performers help the viewer to forgive the early problems. ‘Love In The Time Of Twilight’ is still a good film that nearly rises to be a fine one – it’s recommended despite this fact.