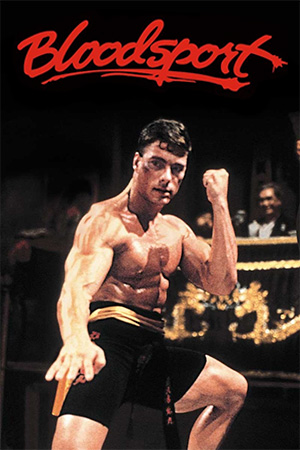 The original ‘Bloodsport’ is widely regarded as Jean Claude Van Damme’s breakthrough film, and has become a cult classic amongst b-movie action fans. This is not without some  justification, as although it is another in a very long line of corny tournament movies, it probably ranks as one of the better examples.

Apparently based (quite loosely I reckon) on a true story, JCVD plays Frank Dux who goes AWOL from the military to compete in the underground martial arts tournament known as the “Kumite”.

There is not much to say about the plot, as it’s a rehash of every other tournament movie you’ve seen. There are some interesting characters thrown in, including Bolo (from ‘Enter the Dragon’) as the main villain, as well as an early appearance by Forest Whitaker, but it’s otherwise a very ordinary b-movie. What puts it slightly above most is the charisma of a youthful Van Damme coupled with some decent action. JCVD manages to hold the attention of the viewer better than most newcomers into low budget films, and his unusual accent, cheesy charm and (dare I say it?) campness, are somewhat enjoyable to watch when outside the kumite setting.

In terms of action, it’s no great shakes compared to Hong Kong movies of the same era, as the choreography is fairly slow and clearly “Americanised”. However, having such a variety of styles on display was pretty entertaining for its time, and many of the bouts could be quite brutal.

Overall, if you’re a regular visitor to Far East Films, then I assume you’ve already seen the film and are reading this review for its nostalgia value. If, like me, these types of 80’s classics hold a special place in your heart, then I recommend you pick up the DVD (it’s cheap!). However, if you are really looking for something that has survived the test of time, then you’d better steer clear!