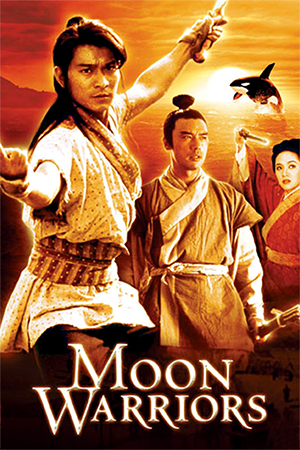 With the new-wave kung fu boom of the early and mid-90’s, it seemed as if any and every Hong Kong star was given the chance to take advantage of the genre. Where there was a lack of fighting prowess on the part of the leading star, there was always enough tricks to give the impression of a confident performer. The result of this period of film-making meant that there were some classics produced, some impressive features made and unfortunately some very forgettable forced on the local audience. ‘Moon Warriors’ could be classed as an impressive feature; although not quite up to the level of a classic, it is still way above average.

Fei (Lau) is a humble fisherman in a small coastal village who enjoys the simplicity of his quiet life. This solitude from the troubles of the country is shattered one morning when he finds himself in the middle of an assassination attempt designed to ensnare a passing prince. Using his considerable skills, Fei helps the royal entourage and guides the injured prince to safety, hiding him in a part of the village. Although from very different backgrounds, the two begin to trust one another and the young fisherman is accepted as part of the fugitive band. The trust is put into operation when Fei is asked to locate and, as it transpires, rescue the daughter of the king of Langling – a woman who was betrothed to the prince from an early age. As the prince’s vicious brother continues to hunt the group, Fei finds himself attracted to Moon (Mui), his new charge. Meanwhile the fleeing royal discovers that there may well be a traitor in the camp and it could even be one of his closest protectors. The emotional turmoil felt throughout the camp is pushed to the fore-front when the enemy closes in and targets the lives of the entire village.

‘Moon Warriors’ stands out from the crowded market of new-wave swordplay films for a few very good reasons. The immediate thing that strikes the viewer is the quality of the action; although wires are used in some instances, there is still an abundance of quality choreography that remains firmly on the ground. The success of these sublime moments is largely down to Sammo Hung’s stellar direction – a reminder of the fact that few can compare to him on his day. Instead of just relying on popular new-wave gimmicks, Sammo pushes each of the actors to their limit and, even though there is liberal use of stunt doubles, the effect is impressive to behold. Coupled with this is a storyline that starts off in familiar fashion, but quickly becomes more and more engrossing. The emotional nature of the characters dilemmas means that ‘Moon Warriors’ is not just dependant on its first-rate action. By the end of this ultimately tragic tale, the viewer cannot help but be absorbed by the film’s power. Each of the four popular stars acquit themselves very well in this unfamiliar genre (even though Mui seems a bit too old for the part she’s playing) and again increase the overall power of the finished production. As sometimes befalls new-wave swordplay films there is some moments which are bizarre and verging on the daft, but these are few and far between. ‘Moon Warriors’ is a praiseworthy effort from a director of definite quality; it’s strongly recommended to all fans of those involved in it.