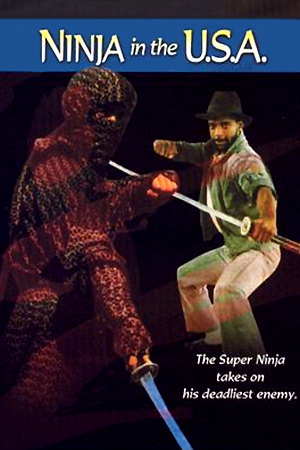 Tiger McPherson (Nicholas) was once a respected American soldier who even managed to rescue two young children from certain death. After the war was over however, Tiger found himself in need of money and he eventually turned to a life of crime. The only thing that has remained from his past is Tiger’s friendship with the two boys he once saved, Ronnie and Jerry (Lo Rei).  Ronnie is now a police officer in the narcotics unit whilst Jerry is living the quiet life and about to get married. When a video exposing Tiger’s devious exploits winds up in Jerry’s hands, Tiger kidnaps his fiancée and demands that the film be returned.  However, he didn’t count on Jerry’s skill in the secret art of Ninjitsu and, with the help of Ronnie, he sets out on a mission to bring down Tiger.

Alexander Lo Rei continues his on-screen affair with the Ninja for this 1980’s Taiwanese actioner. This time around though, the majority of the costumed antics are reserved for the finale and the rest of film feels much more like a standard Eastern action flick. Admittedly the plot is often a touch too silly to tolerate and the majority of the performances are hammy, but the film is fast paced and action packed enough to allow you to overlook its obvious flaws. Lo Rei is also on particularly fine form and he gets to showcase everything from acrobatics to weapon work during his various duels.

‘Ninja In The USA’ certainly isn’t anything special but it’s still a fairly pleasing low-budget chop socky that has some well-handled action. It also provides another opportunity to check out the superior skills of leading man Alexander Lo Rei.